SDRAngel is a general purpose software defined radio program that is compatible with most SDRs including the RTL-SDR. We've posted about it several times before on the blog, however we did not realize how much progress has occurred with developing various built in plugins and decoders for it.

Thanks to Jon for writing in and sharing with us a demonstration video that the SDRAngel team have released on their YouTube channel. From the video we can see that SDRAngel now comes stock with a whole host of built in decoders and apps for various radio applications making it close to an all-in-one SDR platform. The built in applications include:

We note that the video doesn't show the following additional features such as an analog TV decoder, the SDRAngel "ChirpChat" text mode, a FreeDV decoder and several other features.

On the Google Play store developer Knowle Consultants have recently released a new free application called "FM Radio (RTL-SDR)". This is a simple app that allows you to use a connected or remotely networked RTL-SDR to tune into preset broadcast FM stations. People wishing to use an Android enabled head unit in their car may be interested in the app as it makes tuning into broadcast FM stations easy just like it is on a standard radio.

They also have a similar app called "Airband Radio (RTL-SDR)" which provides a similar simple interface for tuning into airband presets.

Rob from Frugal Radio has recently uploaded the next episode in his excellent YouTube series on Aviation monitoring. In this episode Rob covers HF aviation communications. Rob writes:

Whether you are using a Software Defined Radio (SDR), an old school HF receiver, or utilizing a WebSDR, there is plenty to monitor when you know where to look.

This video will give you the basics of where to find the Aviation Communications that take place from 3-30 MHz (HF / Shortwave).

Remember, these signals travel thousands of miles. It can be quite exciting to receive them over such great distances. When editing this video I was listening to a VOLMET station in Auckland, New Zealand - a distance of over 7500 miles (12,200km) away!

Rob from Frugal Radio has recently uploaded the next part his airband monitoring series. This episode covers the topic of monitoring General Aviation communications, which consists of communications with non-military and non-airline aircraft.

In the video Rob discusses what you might hear on general aviation channels, including things like parachuters, news helicopters, air ambulances, police aircraft, aerial surveyors, ultralights, aerobatics, flight training, private and corporate, and sightseeing. He then discusses the various frequencies in use in Canada, North America and the UK.

BaseStation is an old ADS-B visualization program that was originally made to be used with BaseStation SBS receivers which were commonly used for ADS-B reception before the discovery of the RTL-SDR. Many old time ADS-B enthusiasts may already be set up with this software and would like to continue using it, however may have a dead SBS unit, or simply want to use a more modern receiver.

In his latest video Tech Minds demonstrates how you can use the ModeSMixer software to translate ADS-B data coming from an RTL-SDR compatible program like dump1090 into the BaseStation data format.

How To Use BaseStation With ANY ADSB Hardware - Software ModeSMixer

Tech Minds has also released an earlier video demonstrating the AirNav RadarBox XRange2. This appears to be essentially an ADS-B optimized RTL-SDR and Raspberry Pi in a plastic box, with custom SD Card set up and ready to go. At a price of US$299 it is quite an expensive premium to pay, but it may be of use to aviation enthusiasts who have poor technical computer skills that still want to set up a home aircraft tracking station.

Rob from Frugal Radio has recently uploaded the next video in his airband monitoring series. In this video Rob explains various airband communications that can be received from the airport, and explains about needing to be in the line of sight of an airport in order to receive them.

He goes on to explain signals and airport radio communications channels such as ATIS, Clearance Delivery, Tower, Arrivals (Approach), Departures, Radar and Terminal communications. The video provides various examples of these communications being received with an SDRplay software defined radio.

Rob from Frugal Radio has recently started a new YouTube series all about monitoring aviation communications. In his first video Rob gives an overview on what can be aviation signals can monitored and recommends a few hardware scanners as well as software defined radios for monitoring.

This is an introductory video to my new series aimed about monitoring aviation communications. Throughout the series we will talk about:

AirNav is the company behind RadarBox24.com, a flight data aggregation service similar to sites like FlightAware.com and FlightRadar24.com. RTL-SDR hardware is typically used to receive ADS-B, and like other providers AirNav have their own custom ADS-B optimized RTL-SDR unit. In addition they sell RTL-SDR's optimized for UAT 978 MHz and the VHF Airband. They also have a range of ADS-B/UAT/VHF airband outdoor antennas as well as filters.

Currently their products are discounted by 20% for Black Friday/Cyber Monday sales. The discount is available on Amazon, as well as directly from their store with coupon GET20. 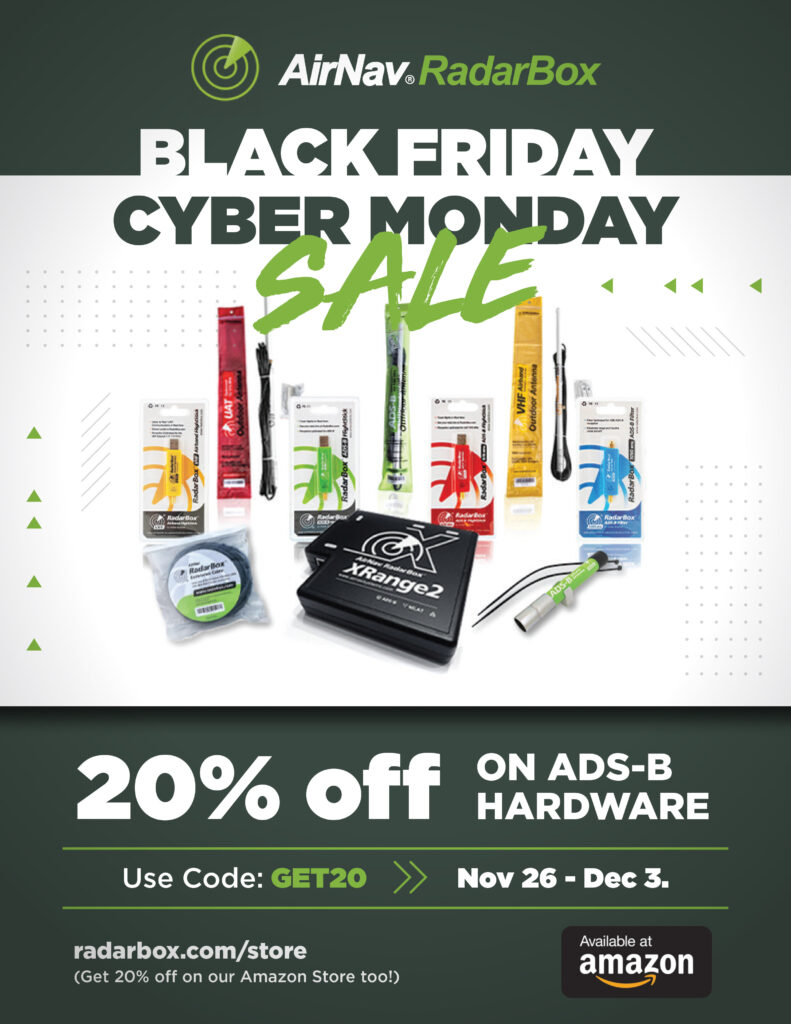