Previously we posted about Android programmer Tosis Nikolaos’s last app which was called “Track your flight Europe”. The app allows you to view aircraft tracked via ADS-B received by an RTL-SDR on an offline map.

Now Nikos has written into us once again to let us know about his new app called “Track your flight North America“. It is the same as his previous app, but this one has high resolution offline maps for North America. He also writes that his Europe app has also been updated to support high resolution offline maps. The app costs 5.09 Euros + VAT. To run it you will need an Android device and an RTL-SDR with OTG cable. 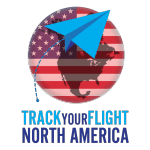 Android app programmer Nikos recently wrote in to let us know about his new app called “Track your flight Europe”. His app can be used together with an RTL-SDR and USB OTG cable to track aircraft via ADS-B. The difference between Nikos’ app and other similar ADS-B apps is that his app is specifically designed for tracking the aircraft you are flying in by providing an offline map which does not require an internet connection to display.

As the app is currently in the alpha stages of development, Nikos is looking for people to help test it out. The alpha can be downloaded for free on the Android Google play store at https://play.google.com/store/apps/details?id=org.qtproject.example.Android_Application_ADSB_final.

A new RTL-SDR Android app called SDRWeather has appeared on the Google Play Market. The new app allows you to listen to weather radio and decode EAS (Emergency Alert System) alerts. The app will only work in the US and Canada. More information about the app and its open source code can be found at http://sdrweather.thecongers.org.

This software along with a supported USB software defined radio turns your Android device to a portable weather radio.