The Noise Figure (NF) is an important metric for low noise amplifiers and SDRs. It's a measure of how much components in the signal chain degrade the SNR of a signal, so a low noise figure metric indicates a more sensitive receiver. The Noise Figure of a radio system is almost entirely determined by the very first amplifier in the signal chain (the one closest to the antenna), which is why it can be very beneficial to have a low NF LNA placed right at the antenna

Over on his blog Rowetel has been attempting to measure the noise figure of his HackRF and Airspy, and also with the SDRs connected to an LNA. He's managed to come up with a method for measuring the noise figure of these devices in real time. The method involves using a GNU Octave script that he created and a calibrated signal generator.

It’s a GNU Octave script called nf_from_stdio.m that accepts a sample stream from stdio. It assumes the signal contains a sine wave test tone from a calibrated signal generator, and noise from the receiver under test. By sampling the test tone it can establish the gain of the receiver, and by sampling the noise spectrum an estimate of the noise power.

Some very interesting sources of noise figure degradation were discovered during Rowetel's tests. For example the Airspy measured a NF 1 dB worse when used on a different USB port, and using a USB extension cable with ferrites helped too. He also found that lose connectors could make the NF a few dB's worse, and even the position of the SDR and other equipment on his desk had an effect.

Over on YouTube Adam 9A4QV (creator of the LNA4ALL and other products) has uploaded a video that explains Friis formula for noise, using simple calculations and theory. These calculations explain why an LNA can significantly help reception on L-Band with an RTL-SDR. In his video he uses graphs and tables provided in this document released by the US Naval Academy. At the end of this post we attached images of the graph and table that he uses in the videos calculations for easy access.

The calculations show how the noise figure and gain of the first LNA in the system dominates the result. The final result of his video shows that using an LNA with a noise figure of 1 dB and 16 dB gain can give an improvement in SNR of about 7.8 dB over a standard RTL-SDR which has a noise figure of 6 dB. This is the improvement on L-band from simply placing the LNA by the dongle, and it does not take into account the extra improvement that could be had by placing it by the antenna, if a run of coax is used. The equations can also be adapted to other frequencies, and they show that as the frequency decreases, the effect of the noise figure of the LNA becomes less important. 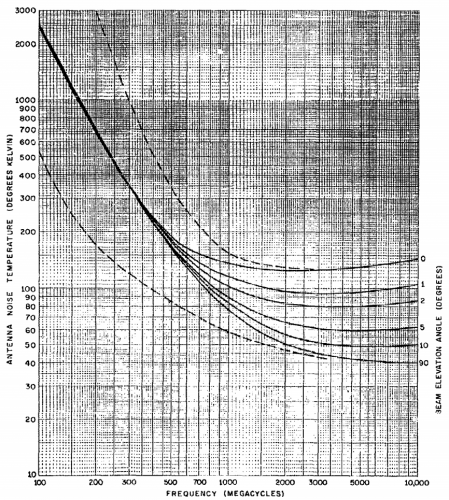 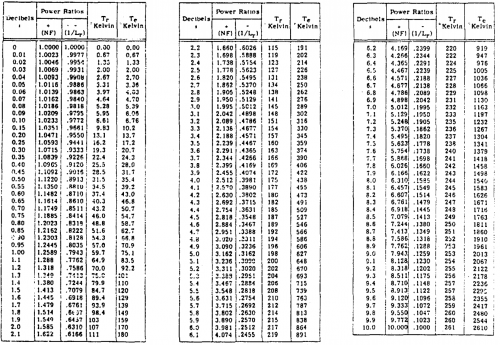 David and Mark are building a 115 kbit/s FSK SSDV (slow scan digital video) data system for high altitude balloons. In their system, on the balloon transmit side they use a Raspberry Pi, Raspberry Pi camera and a RFM22B wireless transceiver modulator board to transmit the SSDV FSK signal. On the receive side they use an RTL-SDR dongle, low noise preamplifier and a GNU Radio program to demodulate the SSDV images. The first video below demonstrates the hardware and GNU Radio program and shows them receiving the SSDV signal. In the second video they demonstrate that the images can be received at low signal levels (-106dBm) as well, by heavily attenuating the signal.

If you are interested, all their code for the SSDV system has been uploaded to https://github.com/projecthorus/HorusHighSpeed.

While testing the RTL-SDR for use in this system they also measured the noise figure of an R820T RTL-SDR dongle. The noise figure at maximum gain comes out at around 5.6 dB. By adding a low noise amplifier they reduce the measured noise figure down to 2 dB.

Back in July 2014 we posted about the CANFI (Cheap Automatic Noise Figure Indicator) system. The CANFI system is a set of hardware components that include an RTL-SDR and a corresponding software program for control. Back then the CANFI system only supported E4000 dongles. However, recently CANFI was updated to version 2.7 and now supports the R820T/2 tuners as well. The documentation has also been heavily improved. The authors of CANFI introduce their system as follows:

One of the main tasks for an experimenting microwave amateur is to measure the Gain (G) and Noise Figure (NF) of a particular receiving device. For this one will need a Noise Figure Indicator and a (calibrated) Noise Source.

There are a number of commercial devices available from different vendors at prices which will exceed an amateur’s budget by many times. A lot of them can be found on the surplus market but this doesn’t help very much. A combination of both meter and noise source is barely sold below the 2.000€ margin.

Since a lot of cheap DVB – T sticks became available the idea was born to use it together with a homebrew noise source as a very cheap alternative to commercial devices [1]. It is now possible to build a suitable solution within a budget of 100 – 200€. Using a PC with USB port for communication and power supply such a device is very compact and almost compatible to an industrial solution. Special software gives a convenient user interface. Last not least you can reuse the DVB-T stick (together with the preamplifier) as a sensitive receiver along with SDR software.

Over on Avian’s blog author Tomaz has posted about some noise figure measurements he has done with an E4000 RTL-SDR dongle. To do the measurements he used a vector signal generator and used the “Y-factor” and “twice-power” measurement methods with the output measured in GNU Radio.

In his results Tomaz saw some odd peculiarities as the twice-power and Y-factor measurements disagreed, coming out with noise figure values of 17.0 dB and 13.6 dB’s respectively. He isn’t sure what could be causing this disagreement but speculates that there must be some sort of physical process within the dongle causing these differences. He was also concerned about the larger than expected noise figure values, since the E4000 datasheet specifies a noise figure of 4 dB, though he points out that these datasheet values may be best case values only.

Their results showed that this setup was comparable to a professional noise figure test set.