Over on YouTube ModernHam has uploaded a video showing how to create an APRS I-Gate and Digipeater with Baofeng and RTL-SDR. He also makes use of a Raspberry Pi as the computing module and an audio cable to connect the Baofeng to the audio jack of the Pi. The tutorial then consists of a walk through of the various software setup steps, and finally how to connect the Baofeng and RTL-SDR to the Pi.

If you weren't already aware, Automatic Packet Reporting System (APRS) is a digital VHF mode used in amateur radio. It allows for packets of data to be sent to receiving nodes over a local area via RF. Typical uses for it are vehicle tracking, weather station telemetry, text messages, announcements and other wireless device telemetry like high altitude balloons. An I-Gate is an internet connected node which receives local APRS RF signals and uploads them to the internet, to be seen on sites like aprs.fi. TX capable I-Gates may also broadcast to the local RF network messages from APRS transmitters on the other side of the world. 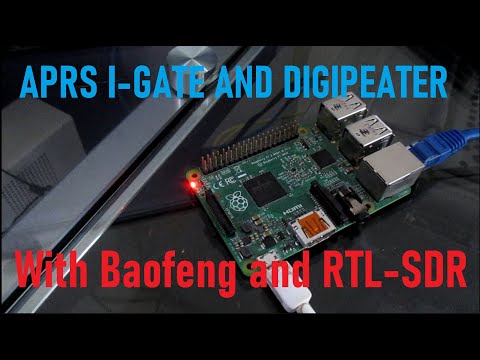 APRS I-Gate and Digipeater with Baofeng and RTL-SDR