DragonOS is a ready to use Ubuntu Linux image that comes preinstalled with multiple SDR software packages. The creator Aaron also runs a YouTube channel showing how to use the various packages installed.

In his latest video Aaron tests his Pi64 image with GR-GSM and IMSI Catcher running with the GNU Radio 3.10 platform on a Raspberry Pi 4. He tests operation with an RTL-SDR and LimeSDR.

GR-GSM is a GNU Radio based program capable of receiving and analyzing mobile GSM data. We note that it cannot decode actual messages without additional information about the encryption key, but it can be interesting to investigate the metadata. GSM is mostly outdated these days, but still used in some areas by some older phones and devices. IMSI Catcher is a script that will record all detected GSM 'IMSI' numbers received by the mobile tower which can be used to uniquely identify devices.

A LimeSDR and DragonOS Focal's Osmo-NITB-Scripts was used to create the GSM900 lab environment. The RTL-SDR was able to see and decode the GSM900 network and although only briefly shown in the video, the IMSI Catcher script works.

Here's the fork used for this video and for testing. There's also a pull request on the main GR-GSM repo for this code to be added.

On this weeks SignalsEverywhere episode, Sarah demonstrates and shows us how to use the SDR++ Server, which was released as a beta earlier this year. SDR++ Server is similar to software like rtl_tcp, and Spyserver as it allows us to connect to a remote networked SDR like an RTL-SDR. Compared to rtl_tcp and Spyserver however, SDR++ Server has a huge advantage in that it is compatible with almost any SDR, and enables the full range of control options for RTL-SDRs.

Due to supply chain difficulties sourcing the FPGA used on the LimeSDR Mini, an End of Life statement for the original LimeSDR Mini has now been released. However, the silver lining is that at the same time as this announcement Lime Microsystems have announced their plans to release the LimeSDR Mini 2.0.

Between the LimeSDR Mini 1.0 and the 2.0, there appear to be no major changes apart from the Intel Max 10 FPGA with 16k logic gates being replaced by the larger Lattice ECP5 FPGA with 44k logic gates. Lime Micro notes

Not only is the ECP5 more readily available than the Intel MAX10 FPGA used in the previous design, but it has an extensive set of open source tools and a great community of developers.

The LimeSDR Mini 2.0 is in currently the 'coming soon' status on CrowdSupply and you can subscribe there to get updates on when it is released.

Recently on Twitter @arvedviehweger (Arved) has tweeted that he has successfully received images from the Russian Arctic monitoring satellite known as ARKTIKA-M1, via it's X-band downlink at 7865 MHz. We've reached out to Arved and he's provided the following information on his setup and how he's receiving and decoding the images.

My first good picture from the ARKTIKA-M1 satellite on 7865 MHz!
It appears that the satellite downlink is a lot stronger now which allows me to finally get a clean decode. I really hope it will stay that way! pic.twitter.com/qy7HDA2uAP

The Arktika-M1 satellite is a Russian weather satellite which operates in a HEO orbit. It was launched in February 2021 and has downlinks on multiple bands. The main payload downlink for the imagery is on 7865 MHz (which is also known as the lower X-Band). The satellite only transmits imagery on the X-Band at the moment, it is currently unknown whether it will ever transmit any image data on L-Band.

For Amateur reception that means having access to X-Band RF gear. It usually consists of a low noise pre-amplifier and a downconverter to convert 7865 MHz down to a lower frequency for easier reception with a high bandwidth SDR such as the LimeSDR, a USRP etc.

In my personal setup I use a surplus pre-amplifier made by MITEQ (around 36dB of gain, 1dB NF), my own self-made DK5AV compact X-Band downconverter and a LimeSDR-USB.

My L-Band gear is now mounted on top of my X-Band gear which allows me to do both at the same time 🙂 I will probably try that on FY3B in the future. pic.twitter.com/SFdy04EwuT

The L-Band gear is mounted on top (helix and the pre-amp behind it) and the X-Band gear is right below. From left to right you can see the feed, the downconverter (silver box) and the LNA (mounted to a heatsink and a fan). Recording is done with a LimeSDR-USB running at a sample rate of 50 MSPS. The satellite transmits every 15 minutes once it reaches its apogee, each transmission including the idle period lasts for about 10 minutes. Some pictures of the idle transmission and the actual data transmission can be found in this Tweet, [noting that Idle = more spikes, actual data looks weaker]:

Some FFT screenshots of the actual signal! pic.twitter.com/TDHHDRchDF

Depending on the geographical location a rather large satellite dish is also required for Arktika-M1. Reception reports all over Europe clearly show that the satellite has a beamed antenna (similar to ELEKTRO-L2).

In my setup I can get away with a 2.4m prime focus dish (made by Channel Master) in North Eastern Germany. It produces around 9 - 10 dB of SNR in the demod of @aang254’s excellent SatDump software. Anything above 5dB will usually result in a decode but since the satellite does not have any FEC you will need more than that for a clean picture. (Image of SNR in Satdump)

Thank you to Adrian (YO8RZZ) for writing in and sharing with us his article explaining how to use an SDR to set up a digital voice hotspot for digital voice modes supported by MMDVM such as D-Star, DMR, System Fusion, P25 and NXDN. Adrian notes that this is possible with any full duplex SDR such as the LimeSDR or PlutoSDR, or with a combination of simplex devices, such as a HackRF for transmitting combined with an RTL-SDR for receiving.

MMDVM is firmware that normally runs on an ARM microcontroller board such as the Arduino Due, and is designed to be interfaced with hardware radios via the microcontrollers built in ADC and DAC hardware.

In order to use an SDR instead of physical hardware radios, Adrian's article describes how a fork of MMDVM called MMDVM-SDR is used in his system as this allows the code to run on a normal Linux computer with an SDR. GNU Radio running on Adrian's own QRadioLink software is then used to create software ADC/DAC interfaces for the SDR and MMDVM-SDR to interface with, as well as providing a user interface.

We recently came across the LibreCellular project which is aiming to make it easy to implement 4G cellular networks with open source software and low cost SDRs. The project appears to be in the early stages, and seems to be focusing on deploying and modifying existing open source 4G basestation software known as srsRAN which will be used with a particular combination of hardware in order to create a reliable and easy to set up 4G basestation solution.

The reference hardware that they are recommending consists of an Intel NUC single board computer ($699), LimeSDR ($315), LimeRFE front end filtered power amplifier ($699), and Leo Bodnar Mini Precision GPS Reference Clock ($140). All together you can create a 4G basestation for around $1850.

Over on his YouTube channel TechMinds has uploaded a new video showing how to use RF amplifiers to extend the transmit range of transmit capable SDRs like the LimeSDR, HackRF and PlutoSDR. Whilst they are transmit capable, most low cost SDRs like those mentioned above can only transmit at very low power levels typically much less than 30 mW. In the video TechMinds tests a wideband SPF5189Z and filtered 2.4 - 2.5 GHZ CN0417 based amplifier, and shows the output power obtained using an inline power meter.

He also notes that these wideband amplifier will also amplify harmonics so filtering is recommended. At the same time we note that you should only transmit if you are licenced to do so (for example with a ham radio licence), especially if you are amplifying the output. 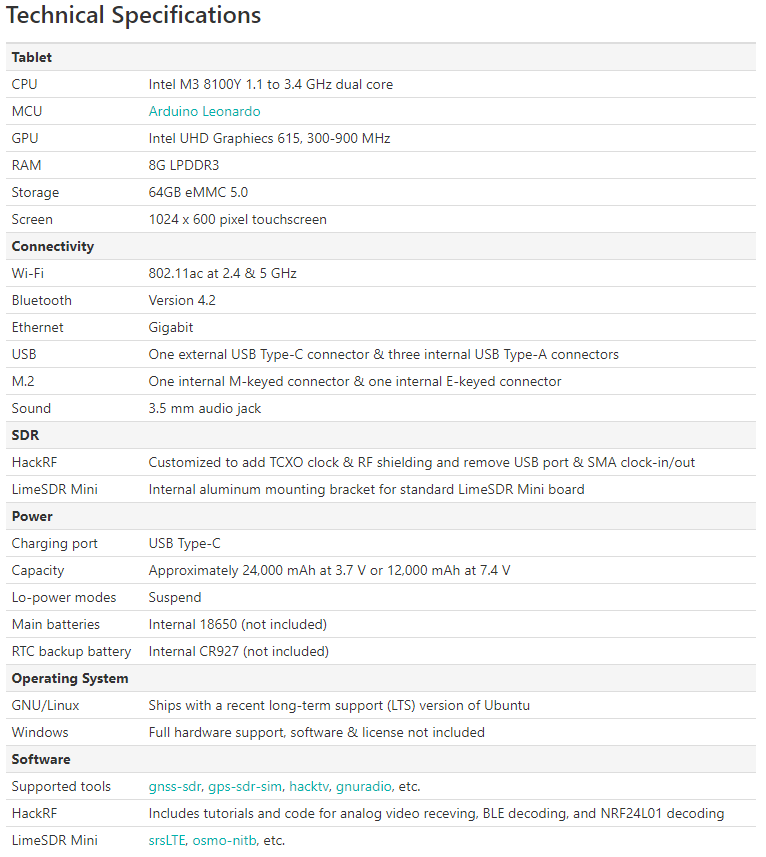