The SDRplay is a $149 USD RX only software defined radio with a 12-bit ADC and up to 8 MHz of bandwidth that can tune from 10 kHz – 2 GHz. We consider it and it’s competitors the Airspy R2/Mini to be the best next step up from an RTL-SDR. See our previous post for a review comparing the Airspy and RSP.

One of the main drawbacks of the RSP has been that it does not have any official software associated with it. The closest competitor, the Airspy has the free official SDR# software, but the RSP relied only on third party programs like HDSDR and SDR-Console.

That is set to change today as SDRplay have announced the release of their SDRuno software, a free general purpose software defined radio program for the RSP. SDRuno is a customized version of the Studio1 software which SDRplay acquired the rights to last April. The full press release is quoted below:

SDRplay is pleased to announce the official release of SDRuno for the RSP. SDRuno is the new name for the RSP compatible version of Studio1, the rights to which we obtained and announced on 28th April. SDRuno contains native support for the SDRplay RSP and no extra plugins are required. Third party hardware can also be supported via the ExtIO interface, but with reduced functionality.

Over time, we plan to add many more features to SDRuno to enhance the user’s experience of this very powerful piece of software. This software runs on Windows and we don’t yet know how easy it will be to migrate it to other platforms but this is something we will be investigating.

SDRuno will be made freely available to all current and future users of the RSP – to download a copy – simply go to http://www.sdrplay.com/windows.html

Our support for SDRuno in no way lessens our commitment to support HDSDR, SDR Console, Cubic SDR or ANY other software solution where the authors are willing to work with us. We fully recognise that many people have strong preferences for particular pieces of software and we do not want to do anything to undermine the options that people have to use their favoured software packages. Indeed, our view is quite the opposite. Our objective remains aim to have our hardware platforms support any and every SDR package out there. This of course may not be possible, but it is our philosophy and part of the ethos of our company.

Studio1 was developed in Italy by SDR Applications S.a.s. and has hundreds of happy customers around the world.

Studio 1 is known for its user friendly stylish GUI, CPU efficiency and advanced DSP capabilities, including features not available on other SDR software packages.

SDRplay limited is a UK company and consists of a small group of engineers with strong connections to the UK Wireless semiconductor industry. SDRplay announced its first product, the RSP1 in August 2014

The software can be downloaded at http://www.sdrplay.com/windows.html. SDRuno comes with a full manual (pdf) and SDRplay fans and beta testers of SDRuno have also released a free SDRuno cookbook guide (pdf). From the cookbook it appears that SDRuno is also compatible with any SDR that supports ExtIO modules, like the RTL-SDR, although as noted in the press release functionality for other radios may be reduced. We look forward to being able to test the software out, and post a review within the next few days. 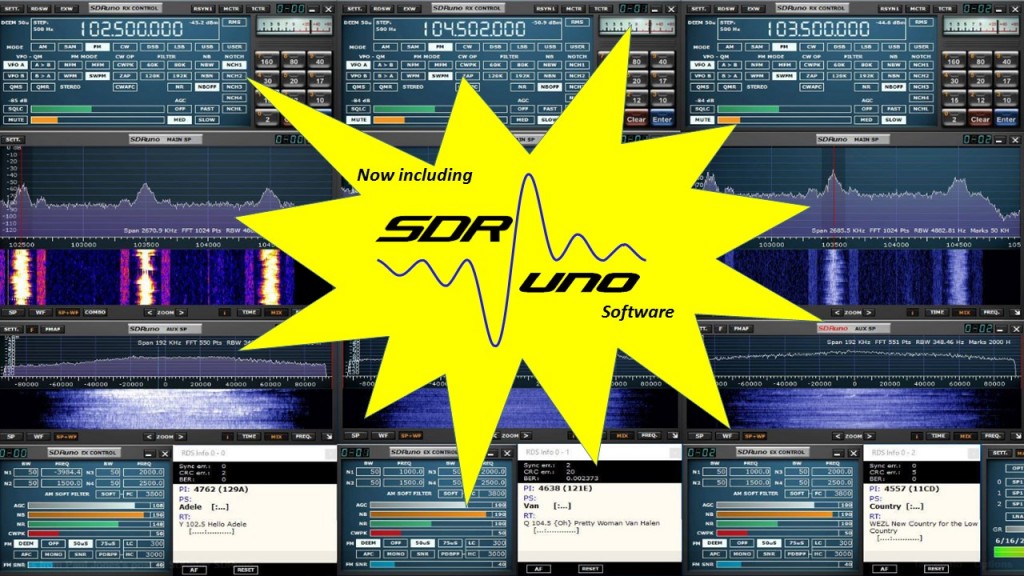 The SDRplay team have been hard at work during the last few weeks. First they announced beta support for Android via SDRtouch, then they announced an improved ADS-B decoder, and finally they have just announced their acquisition of Studio1.

The SDRplay is a 12-bit software defined radio with tuning range between 100kHz – 2 GHz. Many consider it along with the Airspy to be the next stage up from an RTL-SDR dongle.

The author of SDRTouch on Android recently announced support for the SDRplay. SDRTouch is a Android program similar in operation to PC based software like SDR#. To access the beta you can sign up at this link. Currently there is support for up to 2 MHz of bandwidth.

Back in March the SDRplay team released ADS-B decoder software for their SDR with the promise of improving its performance in the near future.

Recently the SDRplay team released an updated version of their ADS-B decoder for the Raspberry Pi which now fully utilizes the full 12-bits of the ADC and takes advantage of the full 8 MHz bandwidth. Jon, the head of marketing at SDRplay writes the following:

We now have an updated beta version of ADS-B for both the Raspberry Pi 2 and 3. This is based upon the 16bit Mutability version of dump1090 developed by Oliver Jowett and unlocks the full 12 bit performance of the RSP1. People should see a significant performance improvement over the dump1090_sdrplus version, which was based upon 8 bit code. The latest beta version can be downloaded in binary form from http://www.sdrplay.com/rpi_adsb.html . Should anyone have questions or feedback, please contact [email protected]

We plan to eventually compare the SDRplay with the Airspy and RTL-SDR on ADS-B performance. If you are interested we previously did a review of the SDRplay, Airspy and HackRF here, but as the SDRplay did not have ADS-B back then, that particular test was not done.

The last major piece of news is that SDRplay have now acquired the Studio1 SDR software. Studio1 is a paid SDR program, similar in nature to SDR#/HDSDR/SDR-Console. Like HDSDR, Studio1 is a spinoff from the old WinRad software. Their press release reads:

SDRplay Limited has today announced that it has reached an agreement with Sandro Sfregola, (formerly CEO of SDR Applications S.a.s.) to acquire all Rights, Title and Interest in Studio 1 a leading software package for Software Defined Radio applications.

Jon Hudson, SDRplay Marketing Director said: “We are delighted to have reached this agreement with Sandro to acquire Studio 1. Studio 1 is the perfect complement to our SDR hardware products and gives us the ideal platform to deliver a complete class leading SDR solution for our customers. We look forward to working with Sandro and further developing Studio 1 to unlock the full capability of our current and future products”.

Hudson added: “Studio1 has established a strong customer base with users of many other SDR hardware products. Studio 1 will continue to be available as a stand-alone product from WoodBoxRadio http://www.woodboxradio.com/studio1.html for the foreseeable future , but we also look forward to further developing Studio 1 to specifically benefit present and future owners of our products”

Sandro Sfregola added: “I am very pleased to have reached this agreement with SDRplay. The long term future for SDR lies in complete end to end solutions and I feel the SDRplay RSP combined with Studio 1 software gives users an outstanding combination of performance and affordability”.

Studio1 was developed in Italy by SDR Applications S.a.s. and has hundreds of happy customers around the world.Studio 1 is known for its user friendly stylish GUI, CPU efficiency and advanced DSP capabilities, including features notavailable on other SDR software packages.

SDRplay limited is a UK company and consists of a small group of engineers with strong connections to the UK Wireless semiconductor industry. SDRplay announced its first product, the RSP1 in August 2014

We believe that this is a good move for SDRplay, as one of the major issues with the RSP SDR was the lack of decently supported software.