Radio manufacturer Uniden have just released news about their latest product called the SDS100 which is a handheld software defined radio scanner specifically for digital voice and trunking modes. The scanner will retail for USD699, and aims to be released in the 2nd quarter of 2018 pending FCC approval. Note that certain software decoders will require paid upgrades, but it will be capable of all the major digital voice modes such as P25 Phase I and II, DMR, NXDN and trunking modes. It doesn't seem to support TETRA since it's marketed at the American consumer, however, it seems plausible that simple software update could enable this feature in the future.

As far as we know this is the first handheld scanner to incorporate SDR and is probably one of the bigger leaps in scanner technology to date. Compared to hardware based scanners, the SDS100 should provide significantly better decoding capabilities, even in weak signal and simulcast conditions. Simulcast is when multiple overlapping base stations transmit a signal at the same frequency. This can cause multi-path distortion problems, but an IQ based radio like an SDR is able to overcome these issues.

The SDS100 is also the first scanner that allows you to decide what to display, where, and in what color. Custom fields put the information important to you right where you need it.

And, one more first, the SDS100 meets JIS4 (IPX4) standards for water resistance.

For more information you can check out this discussion thread on Radio Reference. In the future there should also be some videos of it in action available on the Uniden YouTube channel. The owners manual is also available here and all their promo material including many more demonstration videos can be found on their Google Drive. 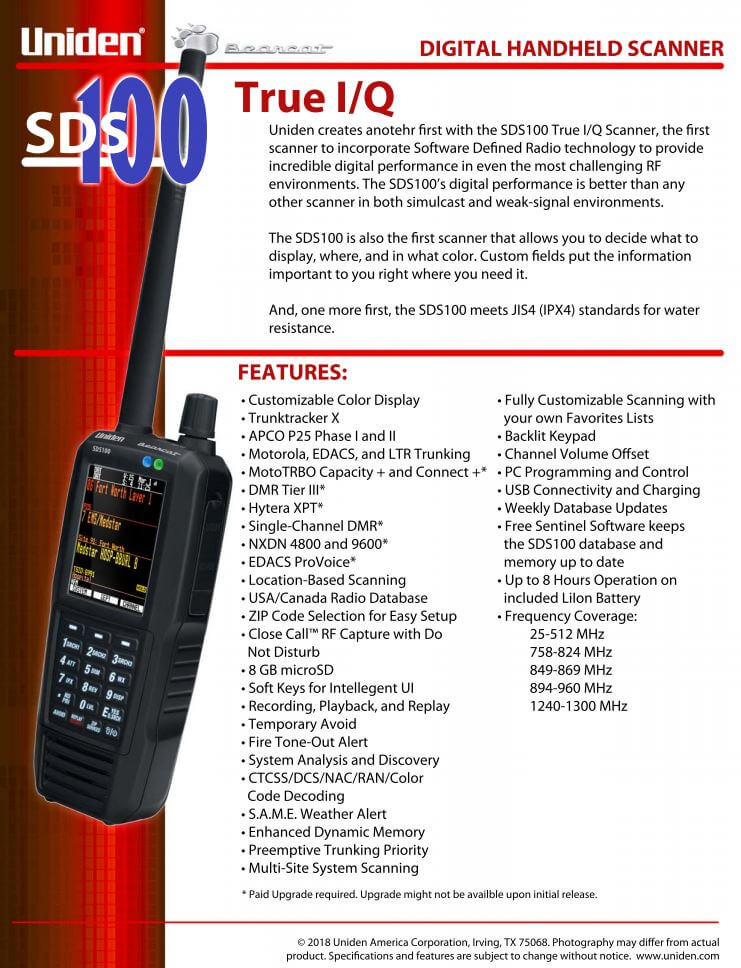