KerberosSDR is our 4x Coherent RTL-SDR that we've developed together with Othernet. It can be used for tasks such as direction finding and passive radar. KerberosSDR was successfully crowdfunded over on Indiegogo, and the first batch has already been shipped. Currently we are taking discounted pre-orders for a second production batch on Indiegogo. Please note that the discounted pricing will expire when we ship, which according to the manufacturing schedule should be next month, so please get in quick if you're interested!

If you'd like to back the KerberosSDR project and purchase a unit, please see our Indiegogo page.

Below are some recent updates to the project:

The Android App allows a KerberosSDR user to drive around in a car, collecting angle of arrival data for a signal. Driving around and collecting multiple data points solves the multipath issue. In a single location it is possible for a signal's direction of arrival to be skewed or incorrect as it can bounce off multiple surfaces and appear to be arriving from a wrong direction. If we collect data from many locations, we can average out the multipath.

We've recently been working on improvements to the direction finding capabilities of the KerberosSDR, and in particular to our free Android App which records and plots data from the KerberosSDR server. We are still testing and finalizing these new features, but hope to release the updated app before the end of this month.

Recently added features to the app include:

Bellow are screenshots showing some of the new features. In this experiment we located an 858 MHz TETRA transmit tower. Initially the app will navigate you to the edge of the grid, in the direction that most DoA lines are pointing to. When there is sufficient data to be able to confidently pinpoint the TX location, it will begin navigating you to the estimated location. In the screenshots the placemarker represents the known location of the transmitter, and the circles indicate the location estimated from direction finding.

Below is screenshots from a 415 MHz DMR tower that we located with KerberosSDR. The antenna array was purposely kept small, with a diameter of only 12cm. Even with the small antenna array we were able to pinpoint the transmitter down to about 100 - 200 meters. 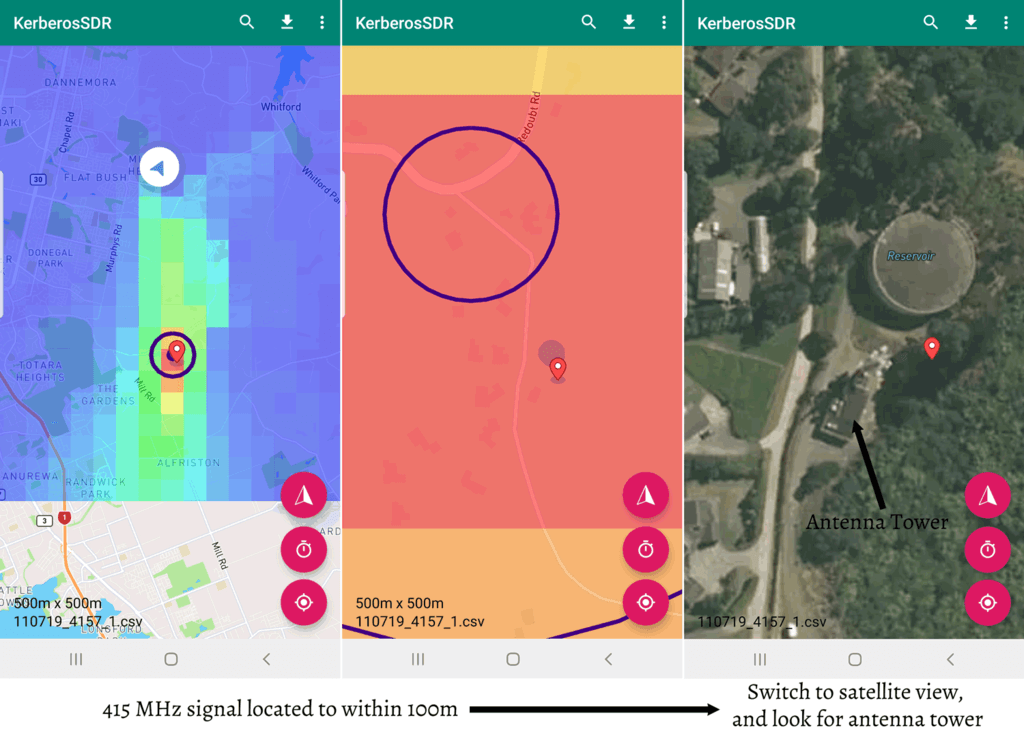 The app should also now be able to handle intermittent signals, via a squelch filtering function, although this has not been fully tested yet.

Batch 2 production is in full swing, and at the moment we're expecting completion by mid August. This batch will ship directly from China, so we should be able to ship them off fairly quickly rather than needing to first wait for them to arrive in the USA.

We have been disappointed that it has been difficult to find low cost but good quality magnetic whip antennas to use with KerberosSDR and vehicles. The quality of antennas used in direction finding equipment can matter, as any signals leaking into the coax, or radiation pattern skew can affect results. We are working on sourcing some high quality magnetic whip antennas that have good ground coupling. These will be sold at a reasonable price on our store.

We are still working on improving the server software further too and future updates will include things like the ability to notch out unwanted signals during phase calibration, a simplified DoA set up wizard, an improved buffering scheme so that additional data and processing gain can be applied, and more.

The Raspberry Pi 4 looks to be an excellent candidate to be used with the KerberosSDR. We will begin releasing ready to use images for the Pi 4 in the future.

Every sale of a KerberosSDR helps fund further developments to the software and possible future iterations of the hardware. So we'd like to thank all backers once again!