As a follow on to the previous post on fake SDRplay units, we also wanted to provide some guidance on fake RTL-SDR Blog V3 clones which are on the market. We are starting to receive an increase in support requests for fake RTL-SDR Blog V3 units. Please be aware that we cannot support these devices, and most of them are missing key features like the bias tee and the TCXO despite advertising these features on the listing and writing on the dongle body. Also as mentioned below a good majority of them appear to have a defect and poor performance.

Please check our store at www.rtl-sdr.com/store for our official stores on Amazon, eBay, Aliexpress and this site. We also have links on our store to our official local resellers. 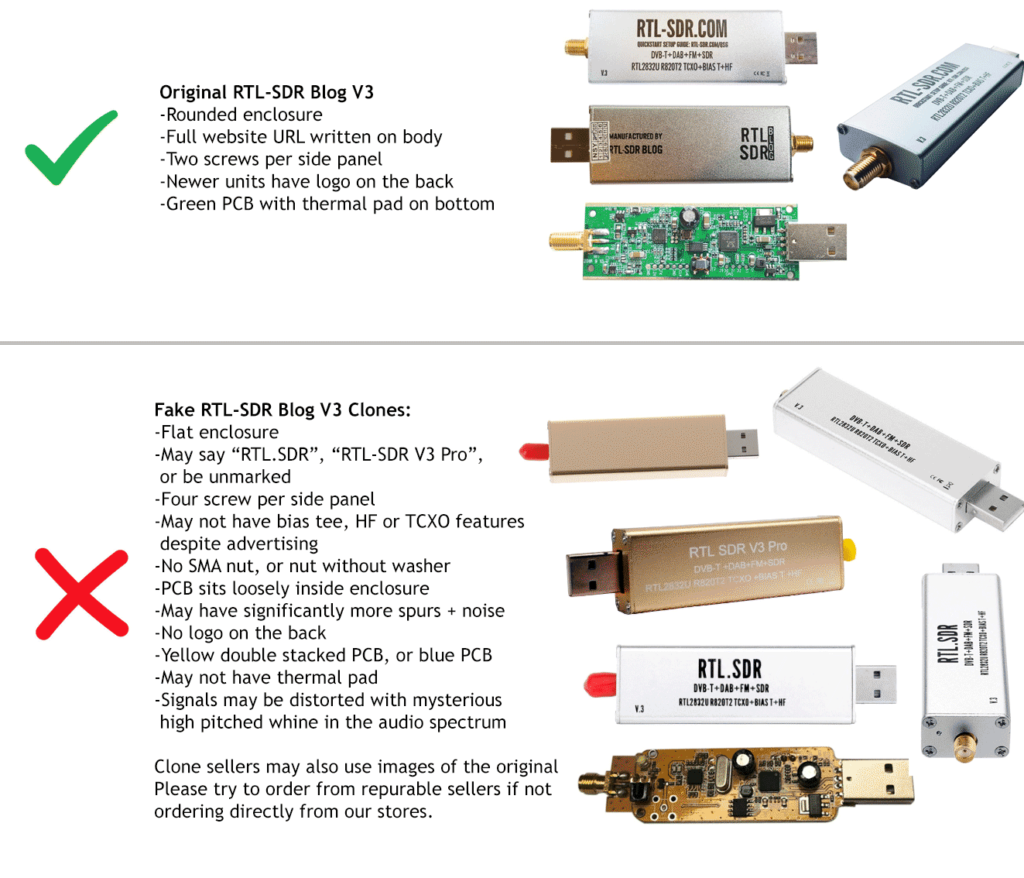 We note that we tested a few of the "RTL.SDR" clones, and all had a defect causing very strange distorted spectrums where the signals where wider than they should be, and some units introduced a mysterious high pitched whine into every signal.

To be clear, different brands of RTL-SDR are perfectly fine - no one owns the RTL-SDR hardware concept and we are not any more "official" than any other brand (although we believe we were the first to start designing and producing significantly improved units and the first to design in a factory fitted TCXO, SMA connector, bias tee, thermal pad, and a redesigned PCB for lower noise and less spurs).

However, these clones shown in the image above can be considered a sort of scam as they attempt to trick buyers into believing that they are purchasing our RTL-SDR Blog V3 units with false advertising and by copying the enclosure design, when in fact the PCB inside is something inferior.

As many of you may know the world is currently dealing with a major shortage of many electronics parts so we wanted to provide an update on the supply chain for the RTL-SDR Blog V3.

In particular, the world is very short on temperature compensated oscillators (TCXO's), a critical component used in our units to ensure frequency stability. The TCXO shortage is actually much worse than other components as AKM, the Japanese semiconductor factory that produces a critical component for making TCXOs burned down late last year. There are alternative suppliers, however their pricing is many multiples higher, and they are also inundated with orders increasing lead times.

We believe that we have enough TCXO stock in storage to last us several more months, however we may run into a shortage in the later months of this year. After we expend our current TCXO stock, we expect to have TCXO again around December, with more RTL-SDRs being ready by January 2022. We want people to be aware, as during these months of no stock more clones may appear on the market. Most clones do not use TCXOs, and hence have poor frequency stability.

Also on a related note our Amazon stock levels may be a little spotty throughout this year as there are currently often delays with shipping and the ports.

We also note that other products that we resell on our store such as the FlightAware Prostick Plus and NanoVNA V2+ are also experiencing supply issues, and may not have stock for a while. Production of some of our other products like the L-band Patch are also delayed due to shortages.

Due to the shortages component prices are also significantly increasing, and you may notice an increase in RTL-SDR pricing from us and competitors too. We hope that we will be able to reduce our pricing again once the global shortage is over, most likely around early next year.