The RTL-SDR software defined radio can be told to run in a mode called “direct sampling mode”, which with a small hardware mod allows the dongle to tune to the HF frequencies where ham radio and many other interesting signals are found. This means that no upconverter circuit is required.

However, the difficulty with direct sampling is that a hardware modification to the dongle is required. Also, the performance can not be expected to be as good as an upconverter without the addition of extra filtering circuits.

The hardware mod is quite simple for someone with good soldering skills. It involves opening the dongle casing, and soldering a “random wire” or “long wire antenna” to pin one or pin two (or 4 or 5) of the RTL2832U chip. This allows RF signals to directly enter the RTL2832 chip by bypassing the tuner chip. Even a short wire a few centimeters long will be sufficient for picking up broadcast AM stations. For ham signals and international broadcasts, a longer wire placed up high is probably required. Care must be taken with the mod as this bypasses all electrostatic discharge (ESD) protection. 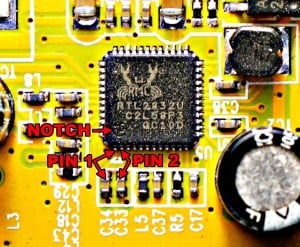 Some more useful images of pin layouts can be found at superkuh’s RTL-SDR blog post.

If a wire antenna is connected to any one of these pins, and the correct direct sampling branch is selected, you will be able to receive signals between 0 – 14.4 MHz. Frequencies between 14.4 and 28.8 MHz can also be received by using a band pass filter. 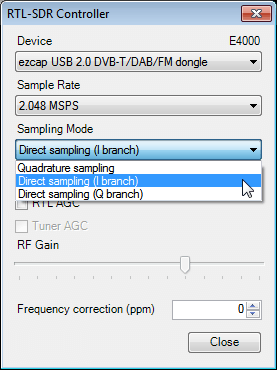 Although 4:1 balun’s work okay, the actual input impedance is much higher than the expected 200-250 Ohms. In actuality it is around 3,330 Ohms, according to measurements made by an RTL-SDR experimenter Martin. Since a wideband 66:1 matching transformer does not exist, the current recommendation is to use the http://194.75.38.69/pdfs/T16-6T-KK81.pdf 16:1 matching transformer. This is about the closest to a wideband 66:1 transformer that we can get. One experimenter, Robert found that he had about a 16 dB – 19dB improvement in signal levels when using the Minicircuits T16-6T-KK81 16:1 transformer, when compared to a 4:1 transformer.

If you don’t want to use a balun then it can also help to connect a 1 nF to 100 nF capacitor to ground on the unused pin.

Instead of using two antenna inputs, one for HF and one for VHF/UHF it is also possible to create a diplexer. This allows you to use one antenna port for both the direct sampling connections, and the standard VHF/UHF connections. See Martin’s post for information on how he built his direct sampling diplexer on an RTL-SDR dongle.