It's been a good time for ready to use SDR Linux OS images recently, as we've seen the release of two new images, DragonOS and gorizont-rtlsdr over this lock down period. And now the already popular and mature PiSDR image has also been updated.

PiSDR is a ready to use Raspbian based operating system for Raspberry Pi's which comes pre-loaded with many programs for software defined radios. It currently supports the RTL-SDR, LimeSDR, PlutoSDR, Airspy, and Airspy HF+ and has preinstalled software such as SDR Angel, Soapy Remote, GQRX, GNURadio, LimeUtil, and LimeVNA.

PiSDR is a Raspberry Pi distribution that is pre-loaded with multiple programs for various software defined radios. It currently supports RTL-SDR, LimeSDR, PlutoSDR, Airspy, and as of the most recent update the Airspy HF+. The currently pre-installed software packages include SDR Angel, Soapy Remote, GQRX, GNURadio, LimeUtil, and LimeVNA.

The latest image can be downloaded from the PiSDR website at https://pisdr.luigifreitas.me. It can be burned to an SD card in the same way that you would with a standard Raspbian installation. This is a great image to start from if you're experimenting with RTL-SDRs on a Raspberry Pi, as it means that you don't need to go through all the steps of installing the drivers and software like GQRX and GNU Radio which can take a long time to install.

[@Lugigi Cruz] has announced on twitter that his latest PiSDR image now includes full PlutoSDR support. PiSDR is a pre-built Raspberry Pi distribution that supports several SDRs including the RTL-SDR. It comes with many applications and libraries ready for you to use some of which include GQRX and GNURadio Companion. PiSDR is available on [GitHub] and just needs to be burned to an SD card to be used. The PlutoSDR is a low cost (typically priced anywhere between $99 – $149 depending on sales) RX/TX capable SDR with up to 56 MHz of bandwidth and a 70 MHz to 6 GHz frequency range. 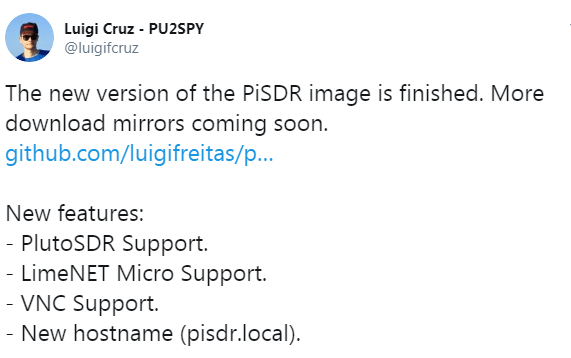 With this update support for the PlutoSDR has been added. This should allow for a host of new interesting uses for the image as it includes SDRAngel, an SDR application that works with transmit capable SDRs. While I’ve not yet tested the image myself, this should in theory mean that the PiSDR image could be used with a transmit capable SDR like a PlutoSDR or Lime/Mini SDR to both transmit and receive anything from DATV to voice and more.

Below you can see the image running the Raspbian desktop with the SDRAngel software connected to the PlutoSDR. Those with a keen eye may also see the LimeSDR mini laying on the desk s well. The concept of SDR on a small microcomputer such as the Raspberry Pi isn’t a new one, but the existence of this distribution makes it much easier for people to jump in and start using it without having to configure and install software from scratch which can sometimes be a daunting task. 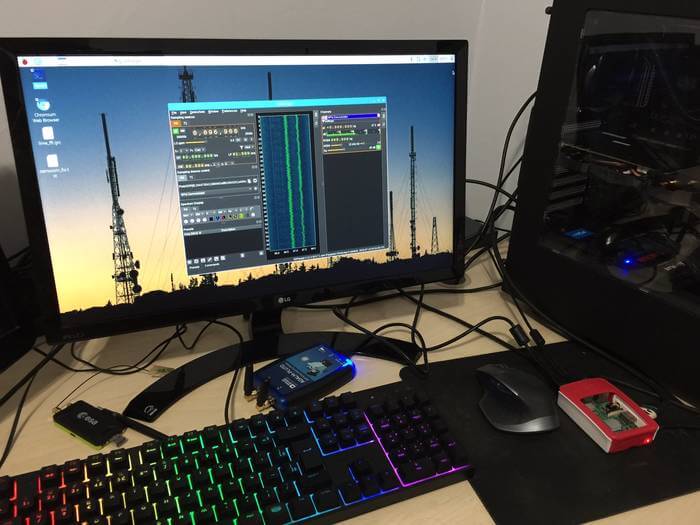