Over on YouTube Double A Labs has posted a new video demonstrating how to use an RTL-SDR and Android device to receive broadcast FM stations, and to decode any associated RDS data.

In the video Double A uses the SDR Touch Android app and the Advanced RDS function to show the RDS information. He goes on to explain the various pieces of information RDS data provides including clock time, active RDS groups and alternative frequencies.

Tune broadcast FM radio and decode Radio Data System (RDS) information using your Android phone and an RTL-SDR USB (see parts list below). RDS can include station identification, song name, the current time for a receiver to sync its clock, alternative frequencies the same program is on, and more!

The performance of WiFi networks can depend heavily on how crowded the WiFi channels are in your area. For example when your neighbours start streaming a movie over their own separate WiFi network, it can cause your own WiFi connection to slow down. This happens because generally separate WiFi networks do not collaborate with one another, and when two packets are sent on the same channel at the same time, they collide causing no packets to get through.

There are several methods that attempt to stop collisions, but none are very efficient because WiFi nodes are not synchronized to one another. If each WiFi node could be synchronized to a common reference time, then avoiding collisions is made easier.

Marcel Flores, Uri Klarman, and Aleksandar Kuzmanovic from Northwestern University have been working on this idea and have come up with a system they have termed Wi-FM which is based on FM RDS signals. Many FM radio stations transmit a digital Radio Data System (RDS) subcarrier on their broadcast frequency. This RDS signal is often used to simply display information on the radio such as the station name and current song playing.

Since each nearby WiFi node should be able to receive the same RDS signal at the exact same time, it can be used as a common synchronization signal. Then once synchronized each WiFi node can listen to the other nodes and work out what their transmit scheduling is like and then optimize their own transmit schedule.

In their prototyping they used an RTL-SDR dongle connected to a PC running GNU Radio. The GNU Radio program decodes the RDS signal and the resulting information is sent to the Linux kernel which handles the WiFi transmit schedule processing.

This story was also covered on Hackaday.

Over on YouTube user pe1etr has uploaded a tutorial video showing how to set up RDS Spy and SDR# for monitoring RDS. RDS stands for Radio Data System and is a sub carrier added to some FM broadcast signals which carries information such as the station name, the song/programme playing and other data. Although SDR# decodes RDS stations already, a more powerful RDS decoder and monitoring tool is RDS Spy. To get RDS Spy to work with SDR# you need to use a special plugin called MPX Output, which allows SDR# to output audio that includes the RDS subcarrier, which can then be piped via a virtual audio cable to RDS Spy.

Pe1etr’s video shows how to install the MPX Output plugin, how to set it up with virtual audio cable and how to use it with RDS Spy.

Signals hacker Oona Räisänen has released on GitHub a new software tool for the RTL-SDR called Redsea. On her blog she explains that Redsea is a Linux and OSX compatible perl based command line Radio Data System (RDS) decoder that uses the rtl_fm tool. Oona’s post explains a little about how RDS works and also explains how her software actually decodes RDS.

The Radio Data System (RDS) is a digital data subcarrier built into some broadcast FM signals. It usually carries information such as the station name and the song currently playing.

GR-RDS is a GNU Radio program which can be used for the decoding of FM RDS data with the RTL-SDR. It has recently been updated to support GNU Radio 3.7.

RDS is an acronym for Radio Data System, which is used in FM radio transmissions to embed information such as radio station and programme/song information. Some conventional FM radios display this information on an LCD screen.

One the authors of GR-RDS has also recently posted a video on YouTube showing it in action with an RTL-SDR source block.

Back in November we posted about Oona’s work with decoding radio controlled bus stop display signs using her RTL-SDR. Oona has given a talk at the Chaos Communication Congress about her work on decoding FM-RDS and the bus stop displays. The talk is now available on YouTube.

How I discovered mysterious hidden signals on a public radio channel and eventually found out their meaning through hardware hacking, reverse engineering and little cryptanalysis.

A story about my experiences with FM-RDS (Radio Data System), a digital subcarrier embedded in FM broadcast transmissions, and also cryptanalysis of the weakly encrypted TMC traffic messages contained therein. I originally found about the existence of such transmissions in a roundabout way, by using a spectrum analyzer program to examine intermodulation distortion in my radioâs Line Out audio. As it turned out, the inaudibly quiet distortion, probably caused by the radioâs stereo demuxer circuitry, contained all the information needed to decode all RDS data present in the transmission. I will demonstrate the journey I took and give a short introduction to how the data is actually encoded. Live acquisition of local RDS data depending on signal conditions in the premises.

As a bonus, I’m introducing yet another little-known FM subcarrier called DARC, and my recent reverse engineering of the bus stop display radio protocol used in Helsinki.

DangerousPrototypes.com have brought to attention a GNU Radio RDS decoding project from the website at Anotherurl. Check out the original post here. Anotherurl uses a GNU Radio Companion flowgraph and a .NET program to decode FM RDS messages. RDS is an acronym for Radio Data System, which is used in FM radio transmissions to embed information such as radio station and programme/song information. Some conventional FM radios display this information on an LCD screen. The popular SDRSharp SDR receiver also has RDS decoding built into it’s FM receiver already, but a GNU Radio implementation is very useful for learning how RDS works. 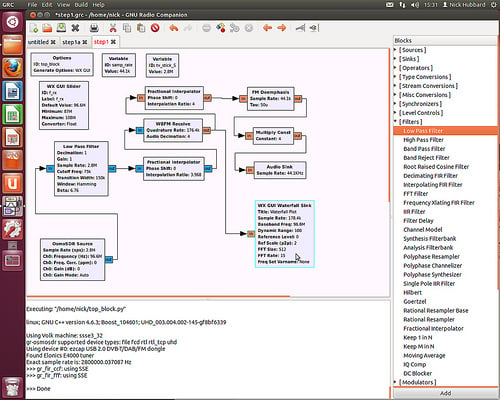