Librespace, who are the people behind the open hardware/source SatNOGS satellite ground station project have recently released a comprehensive paper (pdf) that compares multiple software defined radios available on the market in a realistic laboratory based signal environment. The testing was performed by Alexandru Csete (@csete) who is the programmer behind GQRX and Gpredict and Sheila Christiansen (@astro_sheila) who is a Space Systems Engineer at Alexandru's company AC Satcom. Their goal was to evaluate multiple SDRs for use in SatNOGS ground stations and other satellite receiving applications.

The paper is an excellent read, however the results are summarized below. In terms of noise figure, the SDRplay RSPduo with it's built in LNA performed the best, with all other SDRs apart from the LimeSDR being similar. The LimeSDR had the worst noise figure by a large margin.

Overall the PlutoSDR seems to perform quite well, with the LimeSDR performing rather poorly in most tests among other problems like the NF being sensitive to touching the enclosure, and the matching network suspected as being broken on both their test units. The owner of Airspy noted that performance may look poor in these tests as the testers used non-optimized Linux drivers, instead of the optimized Windows drivers and software, so there is no oversampling, HDR or IF Filtering enabled. The RSPduo performs very well in most tests, but very poorly in the 5 kHz spacing test. 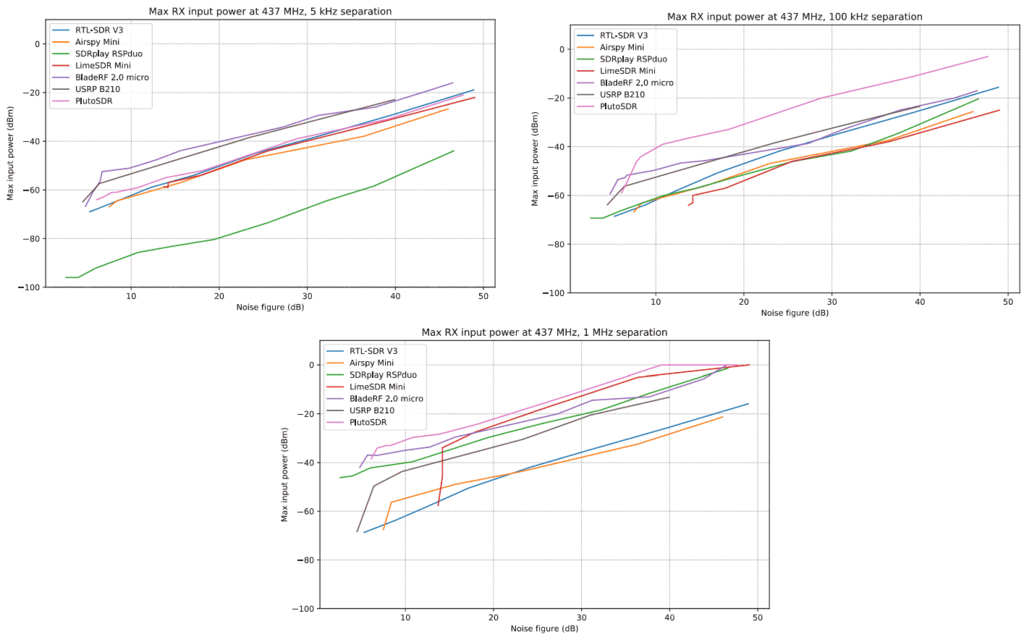 The rest of the paper covers the TX parameters, and we highly recommend going through and comparing the individual result graphs from each SDR test if you want more information and results from tests at different frequencies. The code and recorded data can also be found on the projects Gitlab page at https://gitlab.com/librespacefoundation/sdrmakerspace/sdreval.