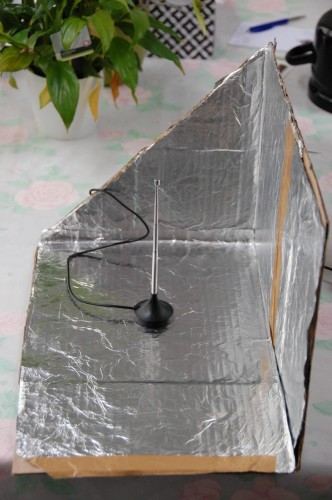 Adam, manufacturer of the LNA4ALL and LNA4HF is putting out an interest check for an ADS-B folded monopole antenna. The antenna can efficiently cover the 1030 MHz to 1090 MHz frequencies that are used by ADS-B.

The major advantage to Adams antenna is that it uses a DC grounded design, eliminating static build up problems that can potentially fry your LNA or RTL-SDR dongle.

If there is sufficient interest, Adam will sell the antenna for 20 Euros.

Akos from the SDR for mariners blog has just written another post that is a guide on constructing and buying beginner level antennas for the RTL-SDR. The post shows how to build a simple ground plane antenna out of wire coat hangers, and also discusses monopoles, telescopic antennas, rubber duckys and discone antennas.

On a new blog called ‘Software Defined Radio for Mariners‘ aimed at mariners wanting to get into cheap software defined radio with the RTL-SDR, the author has posted an article for beginners on choosing a type of AIS antenna to build.

He reviews the performance of multiple homemade AIS antennas with his RTL-SDR, and finds that a Monopole antenna with two radials gave the best value/performance trade off.

He has also written a hardware guide article, explaining some of the most common antennas adapters and cable ends that might be found.