Over on the TechMinds YouTube channel Matt has been experimenting with using a PlutoSDR for QO-100 amateur radio satellite communications. The PlutoSDR is a low cost RX/TX capable SDR with up to 56 MHz of bandwidth and 70 MHz to 6 GHz frequency range (with mods). The PlutoSDR can suffer from frequency instability, especially when warming up, however on the latest model C/D PlutoSDRs it's possible to inject an external clock signal.

In his video experiment, Matt uses a Leo Bodnar GPSDO as an external clock source. A GPSDO is a "GPS Disciplined Oscillator", as it uses the accurate timing information found in GPS signals to create a high quality clock signal. Matt shows how to set up the GPSDO, and how to tell the PlutoSDR to use the external clock.

He goes on to show the effectiveness of the GPSDO with some transmit experiments.

Remote SDR V2 is software that allows you to easily remotely access either a PlutoSDR, HackRF or RTL-SDR software defined radio. It was originally designed to be used with the amateur radio QO-100 satellite, but version 2.0 includes multiple demodulation modes, NBFM/SSB transmission capability, CTCSS and DTMF encoders, modulation compression and a programmable frequency shift for relays.

Over on the programmers blog, F1ATB has put out a new post showing how to install Remote SDR V2 on a Raspberry Pi 4B. The installation has been made simple thanks for a ready to use SD card image.

If you're interested in an overview of Remote SDR V2, we have posted previously about a Tech Minds review of the software.

In his latest YouTube video Tech Minds explains and demonstrates Remote SDR V2, which is software that allows you to easily remotely access either a PlutoSDR, HackRF or RTL-SDR software defined radio. It is designed to be used with the amateur radio QO-100 satellite, but version 2.0 now include multiple demodulation modes, NBFM/SSB transmission capability, CTCSS and DTMF encoders, modulation compression and a programmable frequency shift for relays.

In his video Tech Minds shows how to install Remote SDR V2 onto an Orange Pi via the SD card image, how to access the web interface, and how to access and use the connected SDR.

We note that the code is designed to be run on Orange Pi boards, which are low cost single board computers similar to Raspberry Pi's. However over on Twitter @devnulling has indicated that his own fork of the code should run on x86 systems. Aaron @cemaxecuter is also working on including it into a DragonOS release.

We're holding our first black friday week sale with 6% to 30% off selected products!

Only until Monday, and orders are subject to stock levels and possible back ordering if stocks sell out. Sale is only valid on our web store, Amazon and Aliexpress (the eBay platform will not be discounted due to high fees). Discounts are summarized below, with everything still including free worldwide shipping to most countries:

Please see our store at www.rtl-sdr.com/store for ordering.

Remember to follow us on Twitter, Facebook and via our email list to keep up to date on new posts, product releases and sales. We're also planning a giveaway or two in the coming months which will be done via those platforms. 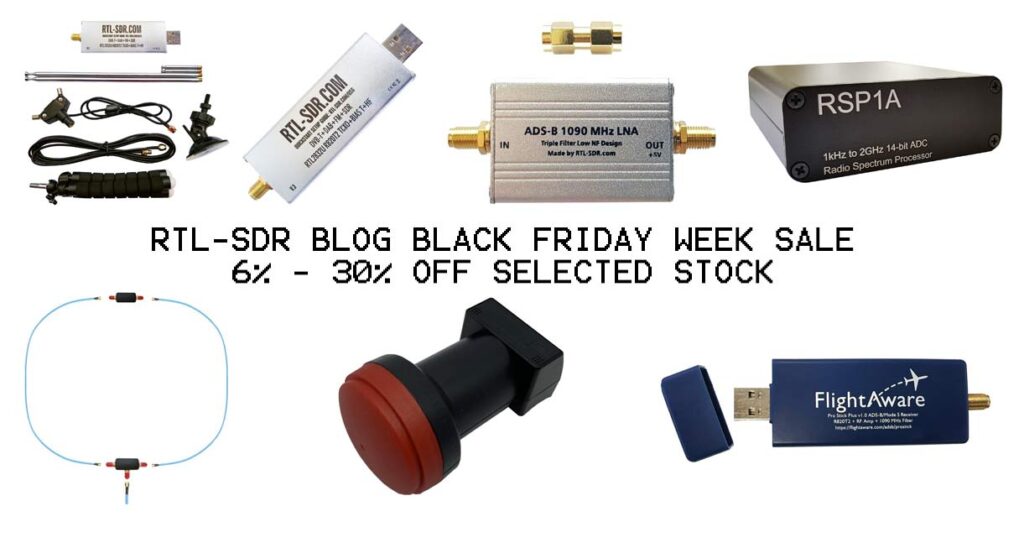 Thank you to Happysat for reviewing the QO-100 Bullseye LNB which we have available in our store, eBay and Aliexpress. The Bullseye LNB is an ultra stable TCXO (temperature compensated oscillator) based LNB which makes it very good at receiving the narrowband signals on the QO-100 amateur geostationary satellite.

Standard LNBs that are sometimes used for QO-100 are not designed for narrowband signals and hence do not have temperature compensated oscillator which can result in the signals drifting in frequency significantly as the ambient temperature fluctuates. Happysat also notes that the extra stability seems to have increased signal strength on the more wideband DATV reception as well.

It does need some time for both the tuner and LNB to get stable, but that's only a few minutes.

Weather conditions shows less "drifting" of the pll where the old LNB was very sensitive of temperature changes, clouds before the sun did have immediately effect on the signal stability.

Some days with storms reception was impossible on SSB Narrow band.

Winter is coming over here so it gets a lot colder and more storms, but I don't expect any problems with this LNB.

Wideband testing DATV reception also shows a more stable signal although its a wider signal then narrowband, it also did increase the signal, e.g. a signal lock happens much faster.

More information about Happysat's setup and his use of the Bullseye QO-100 LNB can be found on his QO-100 website.

Other reviews of the Bullseye LNB include a YouTube video from TechMinds and F4DAV's in depth review on his website.

On September 15 we began our 33% off stock reduction sale for the Bullseye LNB. The Bullseye is an ultra stable LNB for receiving QO-100 and other Ku-Band satellites/applications. We'll be ending this sale on Wednesday, so if you'd like to purchase a unit please order soon to avoid missing out on the sale price. The current sale price is US$19.97 including free worldwide shipping to most countries.

For more information about the Bullseye and some reviews please see the original sale post.

Back in May we started selling the Bullseye LNB on our store, which is an ultra stable LNB for receiving QO-100 and other Ku-Band satellites/applications. We have recently managed to secure a good deal from the supplier. However, our storage warehouse is now low on space and we are hence running a 33% off stock clearance sale with the unit now priced at only US$19.97 including free worldwide shipping to most countries. 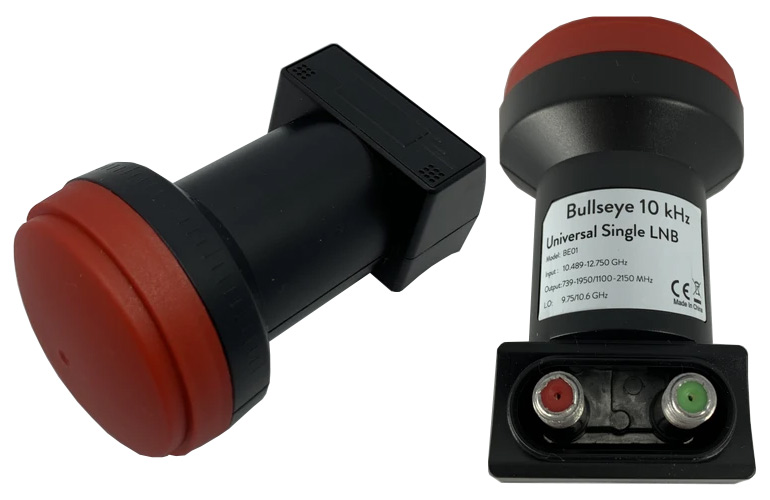 QO-100 / Es'hail-2 is a geostationary satellite at at 25.5°E (covering Africa, Europe, the Middle East, India, eastern Brazil and the west half of Russia/Asia) providing broadcasting services. However, as a bonus it also has the world's first amateur radio repeater in geostationary orbit. Uplink is at 2.4 GHz and downlink is at 10.5 GHz.

Most SDRs do not tune all the way up to 10.5 GHz, so an LNB (low noise block) is typically used, which contains the feed, an LNA, and a downconverter which converts the 10.5 GHz frequency into a much lower one that can be received by most SDRs.

What's special about the Bullseye LNB?

In order to properly monitor signals on QO-100 an LNB with a Temperature Compensated Oscillator (TCXO) or other stabilization method is required. Most LNBs have non-stabilized crystals which will drift significantly over time on the order of 300 PPM with temperature changes.  This means that the narrowband signals used on QO-100 can easily drift out of the receive band or cause distorted reception. Software drift compensation can be used to an extent, but it works best if the LNB is somewhat stable in the first place. It is possible to hand modify a standard Ku-band LNB by soldering on a replacement TCXO or hacking in connections to a GPSDO, but the Bullseye LNB ready to use with a built in 1PPM TCXO and is cheap.

In the past Tech Minds has reviewed this product favourably in the video shown below. In a second video he has also shown how the Bullseye can be combined with a transmit helix in order to create a dual feed uplink + downlink capable antenna.

F4DAV has also reviewed the unit on his website, concluding with the following statement:

As far as I know the BE01 is the first affordable mass-produced Ku-band TCXO LNB. These early tests suggest that it can be a game changer for amateur radio and other narrowband applications in the 10 GHz band. The stability and ability to recalibrate should allow even unsophisticated analog stations to tune to a 5 kHz channel and remain there for hours at a time. For SDR stations with beacon-based frequency correction, the absolute accuracy removes the need to oversample by several hundred kHz or to scan for the initial frequency offset.

We note that an external bias tee power injector is required to power the LNB as it requires 11.5V - 14V to operate in vertical polarization and 16V - 19V to operate with horizontal polarization. The bias tee on the RTL-SDR Blog V3 outputs 4.5V so it is not suitable.

The Bullseye LNB that we have in our store is great for receiving the QO-100 amateur geostationary radio satellite which is available in some parts of the world. However it cannot be used to transmit to the satellite. Over on his YouTube channel Tech Minds shows us how to build a transmit helix antenna that connects to the Bullseye or other suitable LNB, resulting in a dual feed antenna.

The antenna that was built is based on DO8PAT's "Ice Cone Feed" design. The design requires some 3D printed parts for the mount and housing, as well as a copper wire helix, metal reflector and copper matching strip. The Bullseye fits onto the back of the helix mount. Once mounted on a dish Tech Minds shows that he was able to make contact with a friend via the QO-100 satellite with good signal strength.