Recently we've come into knowledge of a program on GitHub called "System Bus Radio" which lets you transmit RF directly from your computer, laptop or phone without any transmitting hardware at all. It works on the principle of manipulating the unintentional RF radiation produced by a computers system bus by sending instructions that can produce different AM tones. An SDR like the RTL-SDR V3 or RTL-SDR with upconverter, or any portable AM radio that can tune down to 1580 kHz can be used to receive the tones. To run the software don't even need to download or compile anything, as there is now a web based app that you can instantly run which will play a simple song.

However, the RF emissions don't seem to occur on every PC, or are perhaps at another frequency. We tested a Windows desktop and Dell laptop and found that no were signals produced. A list of field reports indicates that it is mostly MacBook Pro and Air computers that produce the signal, with some transmitting signals strong enough to be received from a few centimeters to up to 2m away. This could obviously be a security risk if a sophisticated attacker was able to sniff these tones and recover data.

This program runs instructions on the computer that cause electromagnetic radiation. The emissions are of a broad frequency range. To be accepted by the radio, those frequencies must:

By trial and error, the above frequency was found to be ideal for that equipment. If somebody would like to send me a SDR that is capable of receiving 100 kHz and up then I could test other frequencies.

There is also an interesting related piece of software based on System Bus Radio called 'musicplayer', which takes a .wav file and allows you to transmit the modulated music directly via the system bus.

If you're interested in unintentionally emitted signals from PCs, have a look at this previous post showing how to recover images from the unintentional signals emitted by computer monitors. This is also similar to RPiTX which is a similar concept for Raspberry Pi's.

Tel Alviv University researchers D. Genkin, L. Pachmanox, I. Pipman and E. Tromer have released a paper this year detailing their research on extracting encryption keys from PCs via their unintentional radio emissions. They say that they have been able to demonstrate their work by extracting encryption keys from GnuPG on laptops within seconds by using their non-intrusive wireless methods. GnuPG is software which allows you to encrypt and sign your data.

They write about the performance of their results:

Using GnuPG as our study case, we can, on some machines:

In their experiments they used a Funcube Dongle Pro+ to measure the unintentional RF emissions coming out of a laptop computer at around 1.6-1.75 MHz, but they also mention that a low cost RTL-SDR with upconverter could also work.

Every time the CPU on a target PC performs a new operation the unintentional frequency signature that is emitted changes. From these emissions they are able to use the unique RF signature to determine what operations are being performed by the CPU, and from that they can work out the operations GnuPG is performing when decrypting data. They write:

Different CPU operations have different power requirements. As different computations are performed during the decryption process, different electrical loads are placed on the voltage regulator that provides the processor with power. The regulator reacts to these varying loads, inadvertently producing electromagnetic radiation that propagates away from the laptop and can be picked up by a nearby observer. This radiation contains information regarding the CPU operations used in the decryption, which we use in our attack.

In addition to the above they were also able to create portable attack hardware by connecting the Funcube Dongle Pro+ with a small Android based embedded computer called the Rikomagic MK802 IV. They also show that they were even able to perform the portable attack with a standard AM radio with the output audio being recorded with a smart phone.

The researchers write that they will present their work at the CHES 2015 conference in September 2015. 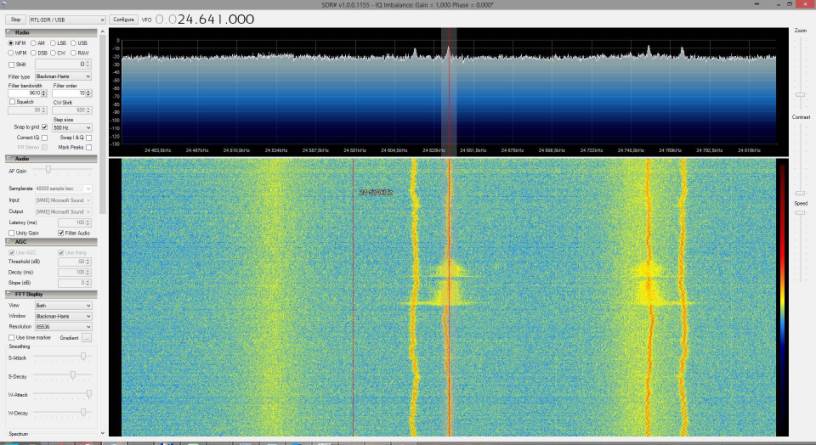