Last month we posted about an RTL-SDR experimenter who shielded his RTL-SDR dongle using an aluminium case. Shielding the RTL-SDR helps to reduce out of band interference which can enter the device through the PCB itself.

Now Melih, another RTL-SDR experimenter has recently posted on his blog about his simpler shielding method that uses cheap copper tape. The copper tape was purchased from ebay, and is the type that is commonly used for creating a slug barrier in the garden.

Over on the Reddit thread discussing his work, there are some concerns about excessive crystal drift due to there being no ventilation holes. However, it seems that the general consensus is that lack of ventilation will not significantly affect crystal drift and may actually help to stabilise the crystal over time by keeping the internal temperature more constant.

You may also be interested in Melih’s previous post where he replaces the MCX connector on the dongle with an SMA female connector.

Over on Reddit user will1384 has posted about his imgur photo album that clearly documents some well researched steps that he took in an effort to shield the RTL-SDR dongle from interference. Interference is caused by strong out of band signals that can sometimes show up even when no antenna is connected to the dongle. Shielding the dongle helps to remove this interference.

The main steps he took were the following:

There is a discussion about this shielding project on Reddit.

Over on YouTube user Cameron Conover has been testing a simple FM broadcast bandstop filter with his HackRF. The same filter can just as easily be used with the RTL-SDR to remove broadcast FM interference and images. Cameron uses a MCM Electronics 88 – 108 MHz FM Trap which can be found very cheaply on Amazon or Ebay for around $15 USD. His video shows that the FM trap works very well and significantly reduces out of band FM interference.

HackRF One with an FM BCB filter

The people at the MIT Haystack Observatory discovered recently that someone was transmitting an interfering signal on their licensed radar band. The interferer was effectively jamming the radar, preventing them from carrying out any experiments.

After checking for local causes of interference and finding nothing, they decided that the interferer must be coming from further away. To find the location of the jamming signal they did some radio direction finding. This involved driving around with Yagi and magnetic loop antennas and RTL-SDR and USRP N200 SDRs and then measuring the signal strength at various points.

For the software they used a custom GNURadio block which calculated the power spectra using the FFTW C library, and averaged the results to disk. They then post processed the data to calculated the RFI power, and correlated the data with GPS coordinates recorded on his phone.

After all the data was processed, they discovered that the interference originated from an FM radio tower which had a faulty FSK telemetry link. They notified the engineer responsible who then replaced the link and the interference disappeared.

YouTube user tvdxrools . has posted a short video showing what solar activity noise from the sun looks like on the waterfall at 31 MHz. He used an RTL-SDR dongle and 1/2 wave vertical antenna.

A few weeks back we posted about some slides from the Defcon conference by information security researcher Melissa Elliot which detailed how she used an RTL-SDR to explore the world of unintended radio emissions. 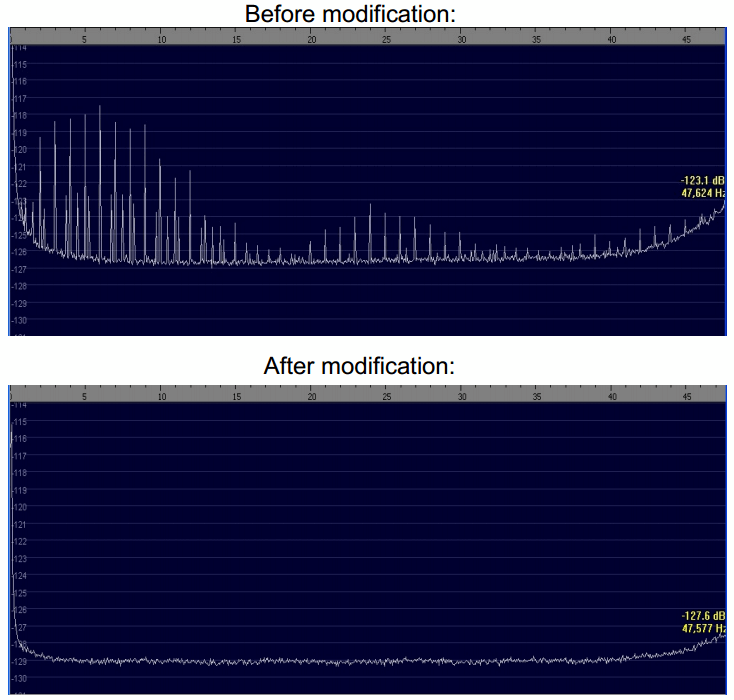 The Ham-It-Up upconverter uses a 5V USB power input. I discovered that different 5v power sources can cause significant interference with this upconverter, and the same effect will probably occur in other upconverters as well.

When the upconverter was powered by mains power via a phone charger, the signals were almost completely drowned out in noise. Powering it with a PC USB port was better, but the PC USB power introduced some other strong noise sources. Powering it with a battery (used a mobile phone with OTG cable) was the best option. There are still some strong noise sources present, but I can probably solve them with better shielding.