On this weeks Frugal Radio YouTube video, Rob explores how to decode Fire, Ambulance and Hospital pager data using SDR++ and PDW. In the video Rob first explains what applications pagers are used for in 2021 and how they're typically received with pager or MDT hardware terminals mounted in fire and ambulance trucks.

He then goes on to show how we can receive and decode these pager messages using an RTL-SDR, SDR++, VB-Cable and the PDW pager decoder. The tutorial shows how to set up SDR++ settings for pager reception, how to install and setup PDW and how to interface the two programs with VB-Cable. Finally Rob explains how to fully understand some of the messages that you might receive.

Canadian based researchers from the "Open Privacy Research Society" recently rang the alarm on Vancouver based hospitals who have been broadcasting patient data in the clear over wireless pagers for several years. These days almost all radio enthusiasts know that with a cheap RTL-SDR, or any other radio, it is possible to receive pager signals, and decode them using a program called PDW. Pager signals are completely unencrypted, so anyone can read the messages being sent, and they often contain sensitive pager data.

Encryption is available for pagers, but upgrading the network and pagers to support it can be costly. Pagers are also becoming less common in the age of mobile phones, but they are still commonly used in hospitals in some countries due to their higher reliability and range.

In the past we've seen several similar stories, such as this previous post where patient data was being exposed over the pager network in Kansas City, USA. There was also an art installation in New York called Holypager, that continuously printed out all pager messages that were received with a HackRF for gallery patrons to read.

YouTube user NeedSec has posted a useful tutorial video showing how to set up decoding of FLEX 1600 pager traffic on a Windows system using PDW, SDRSharp and an RTL-SDR USB stick.

The RTL-SDR software defined radio combined with SDRSharp, and a POCSAG/Flex capable decoding application can be used to decode pager messages. With this setup you can receive pager messages from all pager users on the system. If you don't know what a pager is, since they are now uncommon, here is a brief explanation from Wikipedia:

A pager is a wireless telecommunications device that receives and displays numeric or text messages, or receives and announces voice messages.

Not many people use pagers these days with mobile phone text messaging being used more, but pagers are still popular with doctors, hospitals in general, some fire and ambulance agencies and various IT companies, as they tend to be more reliable and have greater coverage.

Obviously a lot of messages sent through pagers are plain text and contain personal data. Especially messages from hospitals. This is a concern as it is a major breach of patient privacy.

Security concerns also stem from the fact that many IT companies set up systems that forward notices of emails being received with the subject line visible, and system messages that contain IP addresses, email addresses and names, database error messages, and URLs.

Previously an art installation in New York was set up with an SDR to try and highlight some of the privacy and security concerns that pager use brings.

We note that in most countries it is perfectly legal to receive pager messages, as they are plain text unencrypted, but it is illegal to share or act on the information received. In some countries it may be illegal to even set up a receiver. Please research and respect your local laws before attempting this project.

While directed at the RTL-SDR, this tutorial may also be useful for use with other software defined radios such as the Funcube dongle, Airspy and HackRF, or even traditional hardware radios with a discriminator tap.

Since pager signals are usually transmitted at a very strong power, usually almost any antenna will work to receive them, even the stock antenna that comes with the dongle. Pager frequencies differ among different countries. Usually they will be anywhere from 137 - 160 MHz, around ~450 MHz, or around 900 MHz. Check radioreference.com or Google for frequencies in your area, or just search for them manually - they are usually quite easy to spot. Pagers normally use either the POCSAG or FLEX protocols, and the signals will look on a waterfall something like the signal shown below. They also have a distinctive sound when played with NFM mode. A sound sample is also shown below.

For this tutorial, you will need to have an RTL-SDR dongle set up and working with SDRSharp. We will assume you have this much done already. If you do not, visit the Buy RTL-SDR page, and then the Quickstart guide. You will also need to have an audio piping method installed and set up. Audio piping will allow the audio from SDRSharp to be passed to a decoding program. You can use either windows stereo mix, VB-cable (free) or Virtual Audio Cable (paid with trial version).

Now, to decode the POCSAG or Flex signals, you need need to download and install a free program called PDW, which can be downloaded from this page, then follow these steps. 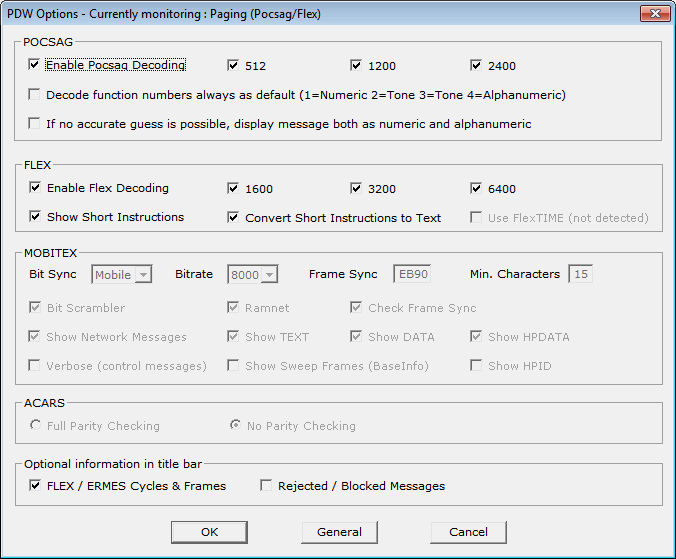 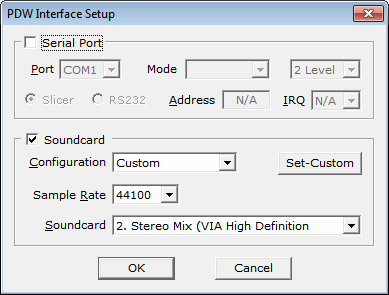 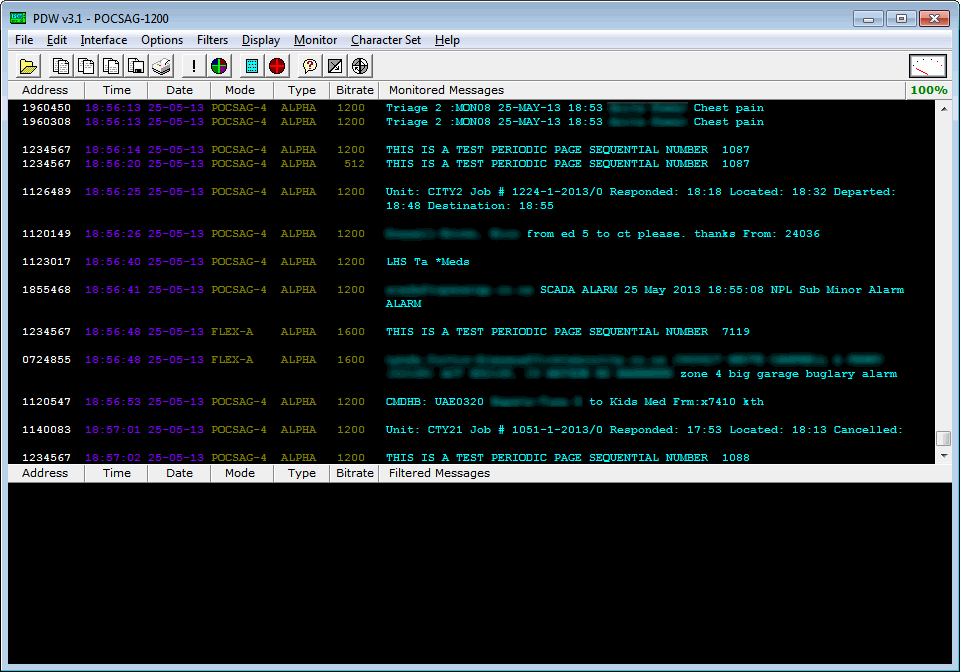 MultimonNG is a Linux based decoder which is lightweight enough to run on a Raspberry Pi using rtl_fm.

PagerMon is a app that records and displays all messages from MultimonNG in a nice web page.