Thanks to all who submitted, we recently received some interesting tip offs about the Netflix TV Show Yakamoz S-245 featuring a scene with various hobbyist SDR and ham radio programs clearly visible. Yakamoz S-245 is a show about a submarine research mission, and the scene appears to depict military intelligence specialists using the programs.

Hilarious scene from Netflix TV series Yakamoz S-245. Seems that the main software used at the Incirlik Air Base in Turkey is @airspy_com #SDRSharp, #MMSSTV and probably the @AmsatUK Dashboard. 🤣
Can you detect any other #hamradio software?@SWRadiogram @SWLingDotCom pic.twitter.com/z7IMfk6v8V

Thank you to Michael (dg0opk) who wrote in and wanted to share details of his full SDR monitoring system for weak signal HF modes. His setup consists of nine ARM mini PCs (such as Banana Pi's, Raspberry Pi's, and Odroid's), several SDRs including multiple RTL-SDR's, an Airspy Mini, FunCube Dongle and SDR-IQ, as well as some filters and a wideband amp. For software he uses Linrad or GQRX as the receiver, and WSJTx or JTDX as the decoding software, all running on Linux.

Michael also notes that his Bananapi FT8, JT65 and JT9 SDR monitor has been up and stably running continuously for half a year now. Bananapi's are lower cost alternatives to the well known Raspberry Pi single board computers, so it's good to note that a permanent weak signal monitoring system can be set up on a very low budget. Presumably even cheaper Orange Pi's would also work well.

With his setup he is able to continuously monitor FT8, JT65 and JT9 on multiple bands simultaneously without needing to tie up more expensive ham radios. His results can be seen on PSKReporter. A video of his RTL-SDR Raspberry Pi 3 decoding FT8, JT65 and JT9 can be found here.

Moon Bounce or “Earth Moon Earth” (EME) is an amateur radio activity where people attempt to transmit a signal towards to the moon, and listen to the reflected signal. In some cases a separate transmitter is not needed, as an already powerful constant transmitter like the GRAVES radar in France can be used.

Over on his YouTube channel user cqpy2rn has uploaded a video showing his moon bounce reception of the GRAVES radar using an eleven element yagi antenna. He compares the reception with an RTL-SDR, FunCube PRO Plus and SDRplay. He writes:

CONCLUSION: In essence all these have the same “DNA”, they were made from digital TV tuner chips, comparisons produce very similar RX practical results, the RTL suffers due the lack of internal filtering which can be a little remediated adjusting the gain carefully through your SDR software or adding external filters. FCDPP and SDRPlay are vey similar, although the freq drift for SDRPlay is a bit annoying to me.

Over on the Hamspirit.de blog author Jan as written a post explaining how to receive the FUNcube satellite with an RTL-SDR dongle (note in German, use Google translate). The FUNcube is a CubeSat (a low cost miniature 10 cm cube sized satellite) which is intended mainly for educating young people about radio, space, physics and electronics, but has also piqued the interest of amateur radio hobbyists.

Jan first writes how the Funcube Dongle was originally invented as a low cost means of receiving the FUNcube satellite, but now there are the even lower cost RTL-SDR dongles. Jan’s post then goes over how to receive the FUNcube at a frequency of 145.935 MHz using software such as SDR-Radio or SDR# and how to decode the telemetry data using the FUNcube dashboard. He also explains a bit about the FUNcubes operating modes which change the satellites transmission strength depending whether or not its solar panels are in sunlight or not.

Blogger “French Fry Cattaneo” wanted a portable laptop with built in SDR capability. To achieve this he opened up his Panasonic ToughBook CF-30 laptop and embedded an RTL-SDR FubCube dongle into the laptop using the space left by unused expansion ports.

Cattaneo connected the two SDRs to a small hub and soldered the usb hub connections directly onto a laptop USB port. He also installed an external SMA connector for the RTL-SDR and connected the FunCube’s antenna port to a cellular antenna that was built into the laptop.

He notes that there could be RF interference issues from the laptop, but has so far had no trouble receiving the strong signals he is interested in.

Recently, the FUNcube-1 satellite was successfully launched. The FUNcube is a CubeSat (a low cost miniature 10cm cube sized satellite) which is intended mainly for educating young people about radio, space, physics and electronics, but has also piqued the interest of amateur radio hobbyists.

Amateur radio hobbyist N4JTC’s has shared on his blog his experiences with receiving the FUNcube-1’s telemetry using his RTL-SDR dongle. By using the RTL-SDR to receive the telemetry beacon as the satellite passes overhead, he was able to use the FUNcube Dashboard software to record and decode and view the satellites telemetry data.

The FUNcube is a software defined radio similar to the RTL-SDR, but with better sensitivity and noise performance, but at a higher price (around $200 USD). These modes can also be received with the RTL-SDR and an upconverter such as the Nooelec Ham-It-Up upconverter. 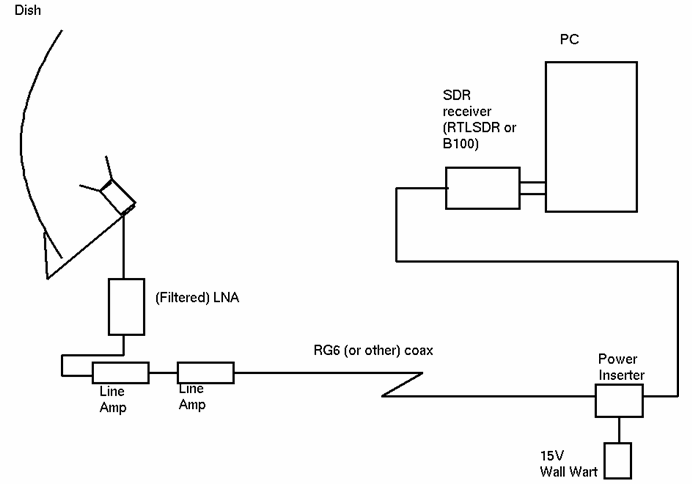 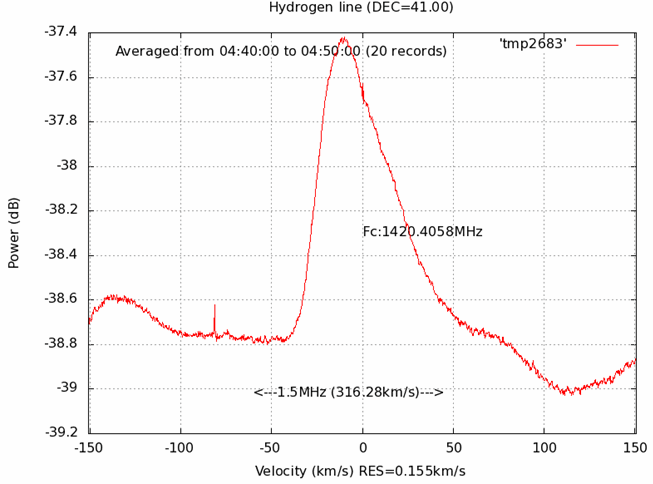 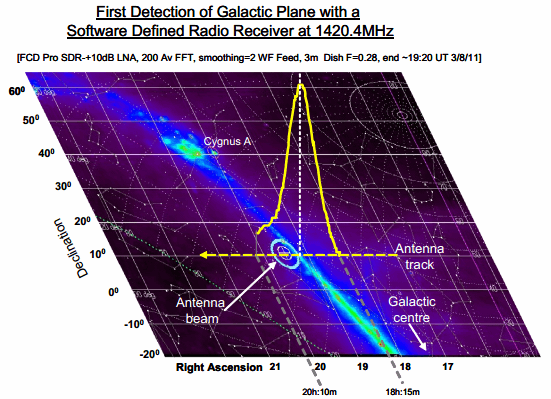