Thank you to Marko who has submitted his blog post showing how he's set up a multiband OpenWebRX receiver via multiple RTL-SDR dongles connected in server based network architecture. OpenWebRX is a open source software platform that allows users to set up multi-user network accessible RTL-SDR and other SDR receivers.

In his post Marko explains the architecture he's set up which consists of multiple antennas, and a Raspberry Pi running multiple RTL-SDRs right by each unique antenna. The Raspberry Pi's send the complete receiver bandwidth over the network to a more powerful virtual server running OpenWebRX. This architecture allows for scalability, and for many users to be able to connect at once.

The rest of Marko's post shows how he set up OpenWebRX and supporting software such as SoapyRemote, which handles the network transfer of the raw SDR data. Marko has created a YouTube video demonstrating multiple connections to the OpenWebRX server, and you can also try out his server directly via this link https://sdr.v4.si.

Thank you to Jason for writing in and letting us know that OpenWebRX Version 1.1.0 has been released on August 03. OpenWebRX is an open source program that allows users to make RTL-SDRs, KiwiSDRs and other SDRs accessible over the internet via a web browser. It is is currently available as a Raspberry Pi SD card image, in the Debian + Ubuntu repositories, as a docker image, or for manual installation.

Since we last posted about OpenWebRX updates in early 2020, there has also been support added for the Perseus-SDR, RadioBerry 2, Hermes HPSDR, Funcube Dongle Pro+ software defined radios. New decoders and support for external decoders such as JS8Call, FreeDV, Wideband FM, DREAM DRM,  FST4, FST4W, Q65 and M17 digital voice have been added.

There is also now a site called Receiverbook.de that aggregates a list of publicly available OpenWebRX receivers. 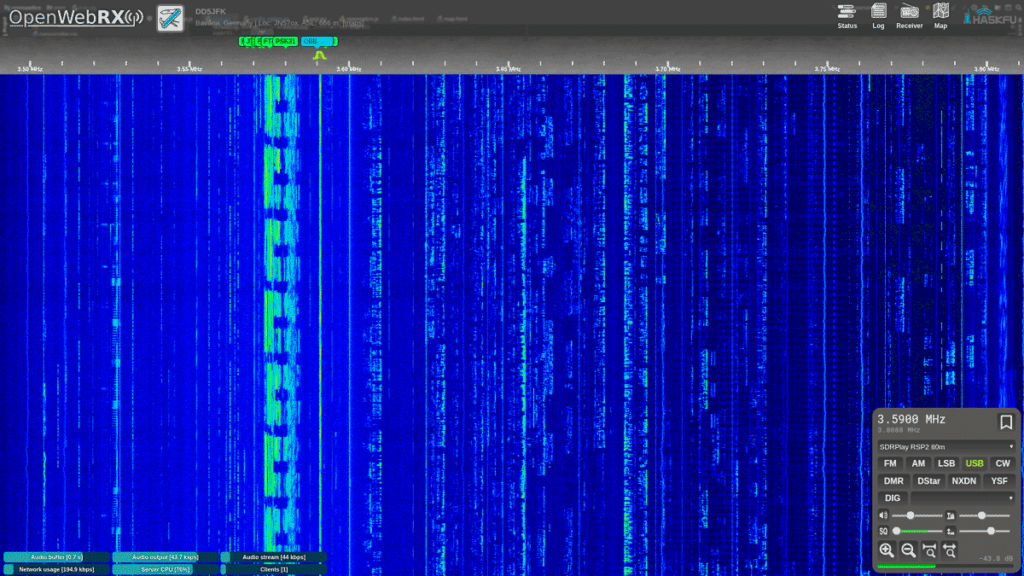 Thank you to Stefan Dambeck (DC7DS) for submitting news about OpenWebRX adding support for Hermes HPSDR compatible SDRs. Hermes is a single board version of the open source high performance SDR (HPSDR) design. There are several compatible Hermes designs including the newer Hermes-Lite 2 . The Red Pitaya is an open source electronics laboratory instrument, but custom software can be installed allowing it to function as an HPSDR type SDR. OpenWebRX is software which allows you to access your SDR remotely via the internet or local network through a web browser. Stefan notes:

I built a test setup today using a Red Pitaya 125-14 SDR in HPSDR mode, and this is now also supported, see screenshot.

At the moment, only one receive stream is supported, for the red pitaya with 192KHz bandwidth.

Over on YouTube TechMinds has posted his latest video which shows an overview of the features available in OpenWebRX, and also how to set it up on a Raspberry Pi. OpenWebRX is software which allows you to access your SDR remotely via the internet or local network through a web browser. All major SDRs are supported including RTL-SDRs. The software includes a waterfall display, all the standard demodulators, as well as several digital decoders for DMR, YSF, NXDN, D-Star, POCSAG, APRS, FT8, FT4, WSPR, JT65 and JT9.

In the video TechMinds first demonstrates OpenWebRX in action, showing reception of HF SSB amateur radio signals, decoding FT8 and plotting received grids on a map, decoding and plotting APRS on a map and decoding YSF/DSTAR/DMR digital voice. After this demonstration he goes on to show how to set up the OpenWebRX server on a Raspberry Pi via the installation image.

This weeks video on the TechMinds channel explores the various online web SDRs that are available to access for free. Accessing these online SDRs does not require any hardware apart from a PC and internet connection, although of course you are then receiving signals from a different location to yourself.

Over on his YouTube channel Frugal Radio has released the second episode in his 2020 SDR Guide series. In this video, Frugal Radio shows how to connect to remote SDRs such as KiwiSDR OpenWebRX, WebSDR, SDR-Console v3 Servers, and SDR# SpyServers. He shows how to use these remote SDRs to monitor long range aviation channels, amateur radio operators, and VHF Public Safety channels in the US. He also demonstrates how to decode HFDL signals from aircraft using WebSDR and free software, and verifies the aircraft locations via online tracking sites.

OpenWebRX was first developed by Andras Retzler and is and open source program that allows users to make RTL-SDRs, KiwiSDRs and other SDRs accessible over the internet via a web browser. Recently the OpenWebRX public directory at SDR.hu, also run by Andras, has been closed. In the past we've posted about Andras' decision to move on from OpenWebRX and how sdr.hu went from public access to requiring an amateur radio callsign to access. Now Andras has decided to take the final step and close sdr.hu for good. The sdr.hu website now reads:

The SDR.hu project has been finished

I'd like to say a big thanks to everyone who joined my journey with this project!

I hope you had a good time listening on the site, and learnt some things about SDR. The purpose of this site was to provide a technological demonstration for amateur radio operators about Software Defined Radio, and I hope this goal has been reached. As this website was a one-person hobby project, with my tasks and responsibilities growing, and my focus moving to other projects at which I hope to make a greater positive impact, I'm unable to further develop SDR.hu and protect it from abuse.

Furthermore, I think this site has some good alternatives now. Nevertheless, in my opinion amateur radio receivers should be shared with strict access control in the future.

If you have more questions, feel free to consult the FAQ.

We want to note that although KiwiSDR makes use of OpenWebRX, the KiwiSDR project is not affected by this closure as they use a custom fork of OpenWebRX, and there is an official KiwiSDR directory at kiwisdr.com/public, a map version at map.kiwisdr.com, and an SNR score directory at snr.kiwisdr.com. Unfortunately the one major drawback is that these directories do not list public RTL-SDRs or other SDRs running OpenWebRX as only sdr.hu did that.

Also, although Andras has stopped development on OpenWebRX, a fork of the project led by Jakob Ketterl (DD5JFK) is alive and well at github.com/jketterl/openwebrx and openwebrx.de.

Back in early January we posted about how the popular web based SDR and RTL-SDR compatible receiver software known as OpenWebRX was officially discontinued by the original author. However, thanks to it's open source licence, code contributor Jakob Ketterl (DD5JFK) has been able to continue developing the code and is taking over as the lead developer on his own fork of the code.

Recently he released version 0.18.0 of OpenWebRX which includes a few major upgrades including the much needed shift to Python 3, and the inclusion of multiple new decoders for DMR, D-Star, YSF, NXDN, FT8, FT4, WSPR, JT65, JT9, APRS and Pocsag.

with great excitement I would like to announce the availability of OpenWebRX Version 0.18.0 as public release. This is the first release of the project in some time, and the first release since I started working on it, so I’m more than happy to bring this to you.

What’s new? Quite a lot, actually. For those that haven’t had the chance to follow the progress of the project in the past months, here’s a quick overview:

Added support for digital modes of the WSJT-X suite (FT8, FT4, WSPR, JT65, JT9). OpenWebRX 0.18.0 is available via the following channels: Please check out our updated Setup Guide along with the rest of the documentation on the Wiki!

Questions, ideas, problems? Get in touch with the community at [email protected]!

We're so glad to see that this excellent software isn't dead in the water and is in fact thriving. We will continue to follow the Jakob's and the OpenWebRX communities' future developments. If you are interested, you can follow OpenWebRX development on the OpenWebRX groups.io forum.