Over on YouTube @dereksgc has been putting together a comprehensive video series on weather, amateur and other satellite reception. His series starts with receiving images from NOAA APT satellites, then Meteor M2, as then goes on to talk about low cost V-Dipole satellite antennas, how satellite dishes work, and recently how to use Ku-band LNBs with a satellite dish.

If you're getting started with RTL-SDR and satellite reception, this video series may be a good introduction for you.

At last years F-Con Jim Gatwood presented a talk titled "SDR Radio for Hackers and Nosy Nellies". The two hour talk has recently been uploaded to YouTube and covers the basics of software defined radio theory, RTL-SDRs and their installation, use of common software, GNU Radio basics, and a broad overview of various other applications including rtl_433, ADS-B and more.

If you're looking for a broad overview of the software defined radio field, and what you can do with SDRs then this may be an interesting talk for you.

Thank you to Joe NE2Z for sharing his Linux distribution called SIGpi. SIGpi is an installable Linux distribution for Ubuntu and Raspberry Pi 3/4 that focuses on providing multiple open source SDR programs that can be used for signal intelligence. Support for RTL-SDR and other SDRs is included.

The distro is actually created via a bash script that installs all the programs automatically on a fresh OS install. It also provides a system for easily upgrading software as developers work on them.

For a full list of the software that comes with SIGpi check out their Wiki.

SIGpi is a "go-kit" for Signal Intelligence (SIGINT) enthusiasts with emphasis on capabilities in the VHF, UHF, and SHF spectrum. For completeness, HF spectrum related software is included for optional install. This (bash) shell script builds SIGINT tools on the following platforms:

Just a quick note to say that our RTL-SDR Blog V3 with Dipole Antenna Set is now back in stock at Amazon USA! This set includes the new black dongle enclosure design.

The RTL-SDR Blog V3 dongle by itself is also in stock at Amazon USA in both the older silver and newer black design.

Pricing remains the same as usual, $29.95 for the dongle by itself, and $39.95 for the dongle + antenna kit. We are doing our best to hold inflation costs down and keep the same pricing, but we can't guarantee that these prices won't need to increase later in the year.

Regarding the new black design, we are currently in the process of transitioning our silver enclosures over to the newer black enclosures. The reason is mostly for regulatory compliance reasons. We're required to have a clearly printed FCC compliance statement on the product. In order to get clear small font text we have to laser etch the text, but laser etching only shows up on dark surfaces. Most black surface coatings tend to be electrically insulating, however we wanted to assure customers that we have managed to find a black plating process that retains the excellent conductivity of the bare silver. Keeping the enclosure electrically conductive ensures excellent shielding of the PCB.

Secondly the black design with our branded logo clearly displayed will help set us apart from the fake products that have now copied our silver enclosure design almost exactly. Those clones generally have a poor quality RTL-SDR dongle circuit inside, but are made to look like our official dongles in order to mislead customers. The clearer branding will also give us more authority to take down listings of any fake dongles that copy our branding in the future.

Note that there are no changes to the circuit design, this is purely a cosmetic change. 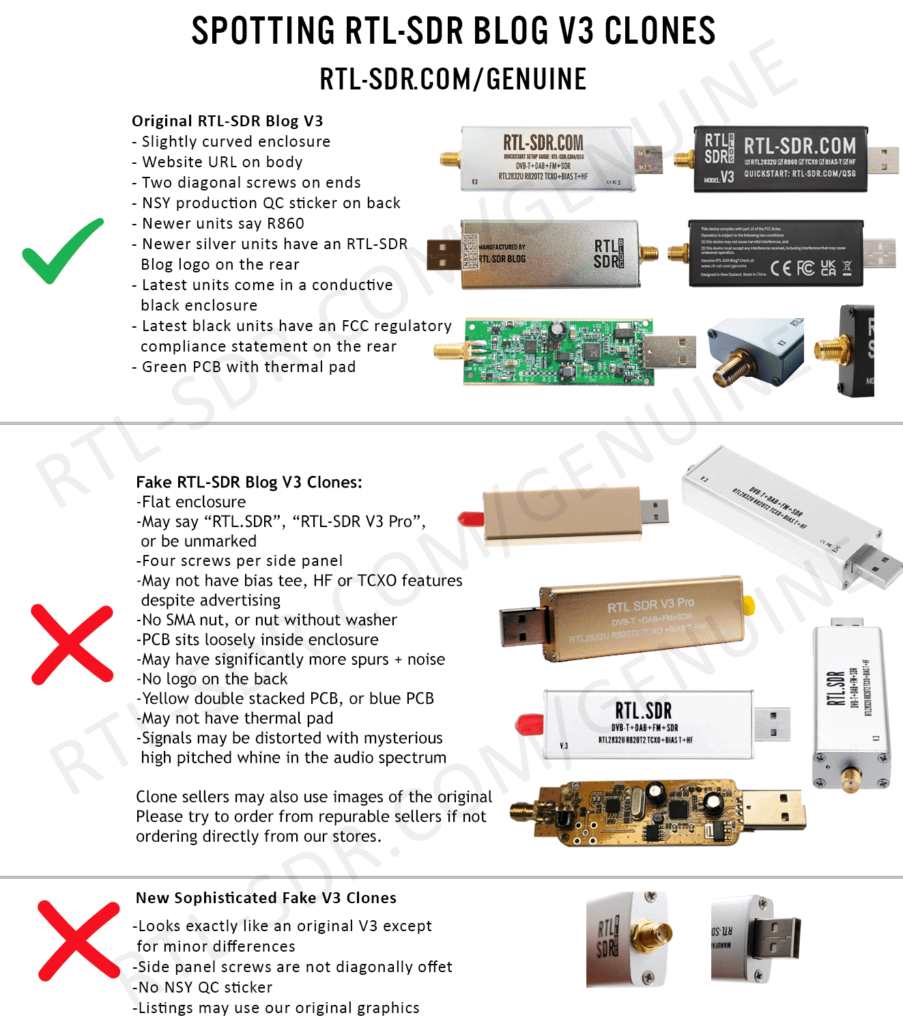 As a second note, we wanted to inform potential customers that it is currently the Chinese New Year holidays, which means that our Chinese warehouse that we use for international shipping will be closed until Feb 1st. This only affects orders directly from our international webstore, eBay or Aliexpress. It does not affect orders from Amazon USA.

We expect our international store to transition over to the black dongles around February as well.

Thanks to all our customers and blog readers for your support over the years! We have a few new exciting products currently being prototyped, so if you are not already, please remember to follow us on Twitter and/or Facebook for product updates, as well as for our weekly blog posts.

SDRangel is a free open source software defined radio program that is compatible with many SDRs, including RTL-SDRs. SDRAngel is set apart from other programs because of it's huge swath of built in demodulators and decoders.

Thank you to reader Jon for writing in and noting that SDRangel has recently been released for Android as a free Google Play download. This is an amazing development that could open up many doors into portable decoding setups as the Android version supports almost every decoder implemented on the desktop version. Jon writes:

It includes most of the functionality of the desktop version of SDRangel, including:

It should work on Android 6 and up. It’s a straight port of the desktop application, so although it will run on a phone, probably best used on a large tablet with a stylus or mouse.

SDR# is a popular software defined radio program that is compatible with RTL-SDR, Airspy and several other SDR devices. One feature is the ability for third parties to develop plugins for the software.

One recently released plugin that is gaining popularity is the "ListenInfo" plugin. The ListenInfo plugin uses a publicly available database of shortwave stations to display frequency station info for the LW, MW, SW bands within the SDR# spectrum display.

If you've ever been browsing the shortwave bands and wondered where a station is broadcasting from, and what it's transit power, beam direction and transmit schedule are like, then this will be a very useful plugin for you.

Weather satellites that transmit HRPT give you high resolution uncompressed images of the earth. With an SDR, L-band feed, 60 cm or larger satellite dish and LNA+filter these images can be received by anyone. Derek OK9SGC has the definitive HRPT reception tutorial available here. However, as these are low earth orbit satellites, the user is required to find a way to track the satellite as it moves across the sky. With some skill and experience, hand tracking can work, but a motorized solution is really what is desired. Other applications such as ham satellite communications as well as radio astronomy projects may also benefit from motorized tracking .

Antenna rotators that rotate in azimuth and elevation can be used to track satellites moving across the sky. The problem is that antenna rotators are typically very expensive, or are a major task to DIY, involving circuit construction and 3D printing of parts.

Recently on Tindie we came across the "AntRunner" which is a relatively low cost portable antenna rotator from China coming in at US$325 with free shipping to most countries (VAT is added for the EU as $50 in shipping fees).

AntRunner is based on two geared stepper motors, a motor controller PCB and an open frame. AntRunners code is open source, as well as some partial hardware schematics.

It can be interfaced via a USB serial connection or through WiFi via it's onboard ESP32 chip, and it relies on the Hamlib 'rotctl' software library running on either the controlling PC, or another intermediary device like a Raspberry Pi. Once setup, software like Gpredict on the PC or Look4Sat on Android devices can be used to control the rotator.

(Note that if you are installing hamlib for the AntRunner, you should do so from source as the packages in Ubuntu 22.04 appear to be out of date. And the older version of hamlib installed via Ubuntu does not support the AntRunner).

Overall the AntRunner works as expected and was easily able to follow HRPT satellites across the sky. It was also great for easily pointing and switching between geostationary satellites like GOES and GK-2A. It easily held and moved a 60cm dish and feed which weighs about 3 kg. The specs of the AntRunner indicate 5 kg max load (although the GitHub specs note 10kg), so it should be able to hold larger diameter dishes as well.

However we did have an issue with the advertised WiFi connection which is an alternative to the USB serial connection. When connected to WiFi the connection would always drop after a single movement command was sent, and it would never reconnect unless rebooted twice. For this reason we abandoned WiFi and only used the USB serial connection, and communicated wirelessly via the Raspberry Pi. There is also a WiFi web interface available for testing movement commands and setting up the WiFi connection, but it is only in Chinese.

It's possible that RF noise from the motors was causing the WiFi disconnection, but on the frequencies that L-band satellites operate at, we did not notice any motor interference.

The AntRunner is advertised as a portable rotator, so that means it is not suitable for use in poor weather as it has no cover to protect the motor circuit board and motors themselves from rain. However, it is certainly small and light enough to be portable. You just need a portable 12V power supply as well.

There are also no limit switches on the device, so if an erroneous command is sent, it could send the motors into a position that could damage something.

Overall if you want something cheap and pretty much ready to use out of the box for tracking HRPT or other LEO satellites, the AntRunner is a good budget choice if you intend to only setup temporary stations. It is not suitable for permanent satellite receiver setups, at least not without some modifications.

A similar product is the SATRAN MK3 which was a 3D printed kit costing 175 Euros + shipping, but unfortunately this product appears to no longer be sold.

The ultimate in low cost rotators is probably the SatNOGS V3 rotator, but as mentioned this is a DIY project that requires a significant time commitment as it involves 3D printing multiple parts, sourcing components, building PCBs and constructing everything together. We have found one company offering a SatNOGs hardware kit, containing all of the parts required for US$445.

A commercial option might be the Yaesu G-5500DC which goes for US$759.95 on HRO, however you also need the GS-232 Rotator Computer Controller for computer control which is an additional US$589.95.

Paolo Romani (IZ1MLL) has recently released version 5.5 of his SDRSharp PDF Guide. The book is available for download on the Airspy downloads page, just scroll down to the title "SDR# Big Book" and choose your language. (At the time of this post only English and Italian are available for 5.5, but multiple languages are available for the older guides).

The latest version brings the book up to 214 pages in length, and adds information about the RTL-SDR Blog antenna kit, and new SDR# plugins like ListenInfo.